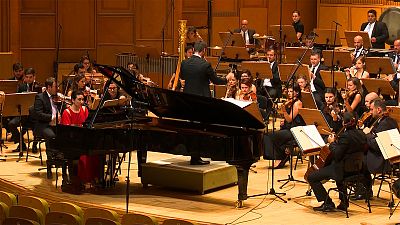 The Berlin Philharmonic Orchestra – currently considered the best in the world - opened the George Enescu Festival in Bucharest. The event is one of the largest classical music festivals in Eastern Europe.

This year’s edition takes place between August 31 and September 22. The concert halls in Bucharest will see over 2,500 musicians of 50 nationalities go on stage for 84 concerts and recitals. A host of international artists will also perform including pianists Mitsuko Uchida and Yuja Wang, mezzo-soprano Joyce DiDonato and actress Marion Cotillard.

Classical music will play in bookstores and petrol stations, while children’s choirs will sing in corporate offices and parks. And fans can tour the old city haunts of the Romanian composer.

Enescu, a violinist, pianist and conductor, is considered by many to be among the greatest musical geniuses of the 20th century. In 1958 - three years after he died - the festival was launched.

It has not only succeeded in including his work into the repertoires of international orchestras. But the cultural event also portrays a different side to Romania far removed from the political scandals and corruption that often make international headlines

Mihai Constantinescu is the festival’s executive director. He says he wants to use the event to portray a different image of the country.

The festival is a huge success with many of the concerts already sold out. It attracts national and international music lovers of all generations - many of whom return year after year.

And this year, for the first time, associated events are hosted in other cities including Berlin and Dresden in Germany, Liege in Belgium, Florence in Italy. And the Canadian cities - Toronto and Vaughan.