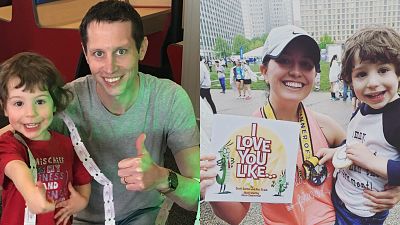 After a move in 2015, Scott Sutton's back started hurting. For months, he saw a chiropractor for what he assumed was a tweaked back muscle, but it didn't improve. Then in January 2016, his doctor found a large neuroendocrine carcinoma on his sacrum. It was stage 4 and it was spreading rapidly. Scott was stunned.

"We felt a little blindsided just because we really were thinking he had a herniated disk," his wife, Anne Sutton, 36, of Pittsburgh, told TODAY Parents. "Doctors explained to us that it was definitely neuroendocrine cancer and it shouldn't be progressing that quickly and it shouldn't be behaving this way."

Scott underwent aggressive treatment to prolong his life. When he first received his diagnosis his son, Alec, was only 8 months old. Scott wanted to live until Alec was at least 5 so the two could share as much time together as possible.

"He was hoping he would be around long enough that Alec would remember him," Anne said.

Scott pursued treatment at M.D. Anderson Cancer Center in Houston and enrolled in various clinical trials. Still, he knew he was not going to survive.

"It was spreading and acting more aggressive," Anne said. "He sort of decided ... 'I need to reevaluate life and I need to leave something for Alec.'"

He worried about leaving videos with advice for Alec as he grew up in case Alec had another father figure in his life. But he wanted Alec to know how much he loved him. When his friend Alec Traub, 39, of Los Angeles, visited the family for Labor Day in 2016, inspiration struck.

"Scott and Alec Traub started this bantering, like inside jokes," Anne explained. "Years before when they worked together they would text each other and email each other with these funny quips."

The two met while working at the Phi Kappa Psi headquarters in Indianapolis, and when they moved on they shared hyperbolic texts about how much they missed each other, always trying to outdo the other to make him laugh. They'd say things like, "I miss you like the woodpecker misses wood and pecking," "I miss you like the grasshopper misses grass and hopping" or "I miss you like an anteater misses ants and eating." When they started riffing on their joke during that visit, Scott realized he could use this as a memory for his son.

"We came up with the idea of doing a book and thought the texts could turn from 'miss' to 'love,'" Traub told TODAY Parents.

Neither of them had any idea how to write a children's book, so they started watching YouTube videos about it. They emailed and texted daily to come up with the best "I love you like" examples. When they had a good draft, another friend introduced them to his father-in-law, Glenn Zimmerman, who is an illustrator at Paws Inc., which illustrates Garfield products. Working on the book brought the friends closer together.

"He and I were certainly at our most vulnerable," Traub said. "Working on this project took our relationship to a whole new level."

Scott saw the book "I Love You Like..." published in September 2018, a few months before he died in December, when Alec was 3 and Scott was 36. Alec often asks to read the book and still talks about his dad.

"It is really amazing. I wish Scott could know that Alec was remembering him," Anne said.

Proceeds from the book go to Alec's college fund. So far, 5,000 copies have been sold. Having a tangible memory of Scott has helped Anne and Scott's family with their grief.

"The book encompasses everything that made me fall in love with Scott. He was intentional with everything he did. He was thoughtful. He had an unmatched wit," Anne said. "That (book) was Scott, wanting to do something thoughtful for his son to show him how much he loved him."

Hundreds gather in London over the death of Mahsa Amini