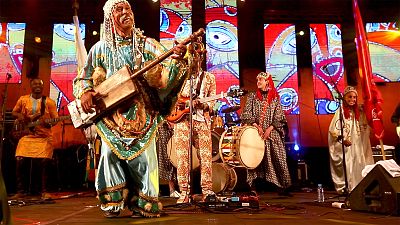 Morocco's 22nd edition of the Gnaoua World Musics Festival in Essaouira brought together the best Gnaoua musicians from across the country. Musicians from around the world were invited to perform with the Gnaoui.

Susheela Raman, a British Indian musician, was a headline act. She is known for her energetic live performances built on the sacred music traditions of India and Pakistan. At the festival she performed with Maâlem Hamid El Kasri, one of Morocco's leading Gnaoui. Susheela Raman is based in London and is very sensitive to ritual trance music:

"I like doing cross cultural collaborations, so that’s why it is very exciting for me to be here in Morocco. I am very fascinated by ritual music, trance states, is very interesting and it influences the way I write in English as well, so trance it very important part of the music."

Another leading act was Tinariwen - a Grammy Award-winning group of Tuareg musicians. They are from the Sahara Desert region of northern Mali. The group's music is considered a grassroots voice of the Tuareg rebellion which fights for independence for the northern region of Mali. Abdallah Ag Alhousseyni is a musician and co-founder of Tinariwen:

"We transmit the message of the Tuaregs of the Sahara dessert - the core of our music is to inform people around the world of who the Tuaregs are and of their problems."

They performed with Maâhlem Mustafa Baqubou who has played with international stars like Marcus Miller, Pat Metheny and Santana:

"The Gnaoua culture has been in the shadow for a long time - now its internationally known. Hopefully the younger generation is carrying on the torch and pushing the barriers further so that this culture keeps on growing."

Moroccan stars also performed at the festival. Nabyla Maan from Fès was influenced by traditional Moroccan music, Franch chansons and jazz. At the age of 19 she became the youngest of any Arab or African to sing at the Olympia in Paris. Her 2017 album Dalalu Al-Andalus won two prizes at the Morocco Music Awards.

The festival featured traditional music, but also music from the emerging music scene in Casablanca which has developed since the Boulevard Festival at the end of the nineties. One rock band, Betweenatna performed - Mohammed Laabidi, also known as Oubiz, spoke about his music:

"The only connection we might have with Gnaoua music is the Moroccan identity and also the issue of trance because in rock music there is a lot of trance. But the extra thing we have is craziness, we try to have fun and we share this with our audience."