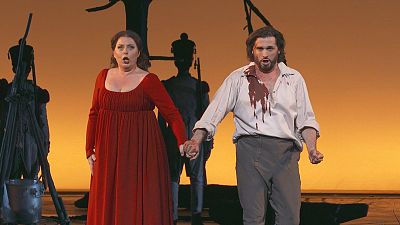 It is one of the most dramatic thrillers in the history of opera, and now Giacomo Puccini's Tosca has returned to Paris.

It is showing at the Opera Bastille and features Martina Serafin as the titular tragic heroine and Marcelo Puente as her passionate lover Cavaradossi.

Based on Victorien Sardou's 1887 French play 'La Tosca', the Italian opera premiered in Rome in January 1900.

It took four years for Giacomo Puccini to write the melodramatic work, but even today it is one of the most requently performed operas.

The show's conductor, Dan Ettinger, told Euronews that the success is partially down to Puccini's writing.

It tells the story of the relationship between singer Floria Tosca and painter Mario Cavaradossi, as well as Baron Scarpia, the chief of police who lusts after Tosca.

The show features depictions of torture, murder and suicide, with four characters dying in the less-than three hour show.

"Drama, passion, betrayal, politics, jealousy, intrigue, torture. Everything is there. All the human emotions," said Marcelo Puente, the tenor who plays Cavaradossi.

Soprano Martina Serafin even compared the emotion and drama of the performance to watching a film.

"Puccini really is ahead of his time, because he just deals with emotions in such a wonderful way," she said.

"There are moments, for example when Scarpia says: 'Open the doors', so that Tosca can hear her lover being tortured, and then the orchestra starts. He says: 'più forte, più forte'. This is a moment that feels like a movie."

The fury of a woman in love has fatal consequences. Tosca murders the chief of police, Scarpia, after he attempts to rape her.

But, despite her actions to rescue her lover Cavaradossi, she is too late.

"In this aria "E lucevan le stelle", the stars are shining. He is in prison, he is surrounded by soldiers. He's alone, it's a goodbye to life," Marcelo Puente told Euronews.

The opera ends with Tosca alone on stage as she sings for one final time, before committing suicide.

"Puccini made Tosca a gift in offering her this ending, it's only her who sings," Martina Serafin said.

"When I sang it today, I almost cried because it is so strong for me. This black curtain falls down and it is clear what's happening. She dies and then she is in another dimension, you can see her going into the light."