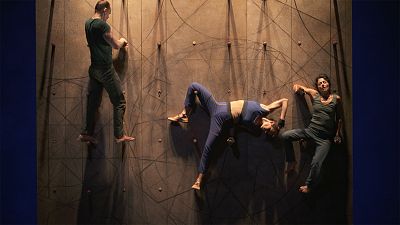 "Vertikal" from French choreographer Mourad Merzouki is turning hip hop on its head at the latest Lyon dance Biennale.

For this world premiere, his dancers take to the air, freed - for an instant - from gravity.

"In hip-hop dance excellence is always the goal, we are always looking for flight in some way," says this native son of the Lyon suburb of Bron. Conquering the world of dance, he's come a long way since taking part in the first-ever Biennale in 1984.

"Our system allows us to go that little bit further, and allows us a little more complexity for the dancers and the choreography," he says.

But there is a conflict at the heart of Vertikal. Rather than flying freely, Merzouki's dancers, who use harnesses and counter weights to take to the air, appear to be puppets on a string, trying to escape.

"Picking yourself up after a hard knock is difficult. Life isn't easy. Life is a struggle. We believe that we are free , but we aren't really. We are restricted to spaces, like the one we see here, this could be a tower block in a suburb, why not? This could be the architecture that we see today, nibbling away at our green spaces, little by little. So we find ourselves eventually in very limited spaces," he says.

The artistic director of the Biennale has known Merzouki a long time, and is a huge fan.

"Mourad's work is interesting because he is always looking for tangible disciplines, putting a new twist on hip-hop, and so, for "Vertikal", and its vertical dancing, he brings in stances, movements, and other things that are completely new," says Dominique Hervieu.

Hervieu enthuses about another of the Biennale's shows, one that has already won international accolades, but has produced a tailor-made adaptation for Lyon.

"There's also the Peeping Tom company from Brussels at the Lyon Opera Ballet, a meeting between the opera's dancers who are more used to abstract dancing, and a story, exploring the psychology of characters," she says.

Peeping Tom's piece won the 2015 Olivier award, and is considered by many one of the great successes of this decade.

Yoann Bourgeois is a man of the circus, and has adapted his well-regarded Fugue/Trampoline piece for virtual reality

While virtual reality is again used by the Artanim company to create a totally new sensory experience in "VR-1".

Swiss artist Martin Zimmermann, another man of the circus, creates a wordless theatre piece, "Eins Zwei, Drei" set in a museum, where bodies, objects and situations replace text, and revolt against the sacred space's rules and conventions.

"This year's Biennale sees some 20 world premieres in Lyon and the surrounding region, from virtual reality works to Japanese hip hop, but it's not just the professionals who get to perform as part of the biennale, it's the thousands of people who took part in yesterday's parade, the amateur dancers, the school children - who make this festival unique," reports Euronews' Andrea Bolitho.

The festival of dance runs until September 30.