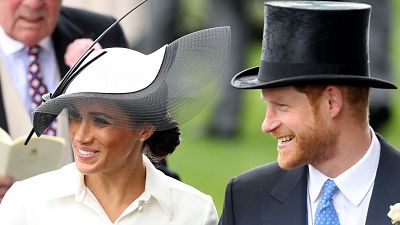 The Duchess of Sussex made her Royal Ascot debut Tuesday for the opening of the always-fashionable and famously hat-filled racecourse event.

The former Meghan Markle road alongside Prince Harry on a horse-drawn carriage as part of the annual procession — on what happened to be their one-month wedding anniversary.

And she gave royal watchers a good look at her latest sartorial selection.

For the third time since joining the British royal family just weeks ago, Meghan chose to wear a Givenchy design.

The crisp, white shirtwaist dress is yet another example of a minimalist Givenchy look of which she's clearly fond — her sleek and simple wedding dress being another — and the style harks back to another head-turning fashion choice.

Prior to her duchess days, Meghan made her first official appearance alongside Harry back in September of last year at his Invictus Games, where she wore a bright white "husband shirt."

Of course, nothing quite that casual would do for Royal Ascot, which has its own dress code that covers everything from the minimal hat circumference to the preferred width of dress straps to a ban on fascinators all together.

For Ascot, Meghan paired her white dress with black accents in the form of a thin belt that looped around the embroidered waist of the design, as well as a hat that boasted black netting and a leather bow.

As for Harry, he stuck to traditional morning suit attire — the only allowed option for the gents.

Of course, the duke and duchess weren't the only royals turning heads during the fashionable outing.

Queen Elizabeth looked picture perfect in one of her many go-to bright hues in a sunny lemon yellow.