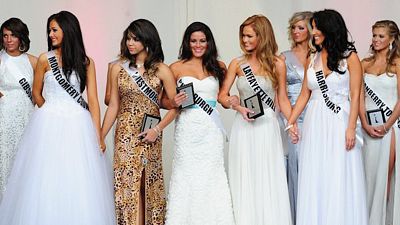 TheMiss America organization just announced a huge change in the competition format — they are taking steps to judge contestants more on their inner beauty, rather than their outer beauty.

The pageant released a statement saying that "this change in format signals the end of the swimsuit portion of the competition. In its place, each candidate will participate in a live interactive session with the judges, where she will highlight her achievements and goals in life and how she will use her talents, passion, and ambition to perform the job of Miss America."

As a former pageant contestant who has competed for the crown on a state and national level, I applaud the organization for taking the right steps. I think it will completely change the meaning of a "beauty" pageant — for the better.

It's been almost 10 years, but I still remember my first swimsuit competition.

As a terrified 16-year-old, I took the stage in front of hundreds of strangers, dressed in nothing but my bikini and a pair of 5-inch, clear plastic heels, praying I wouldn't fall.

I spent four years in pageant-land, vying for a chance at the Miss Teen USA crown. I was coached on how to walk, talk and pivot on a slippery stage in heels. I was spray-tanned such a vibrant shade of orange that I could easily have been taken for an Oompa Loompa. I criss-crossed the country from New York City to Houston, spending countless hours attending events with pageant winners from every state.

But all of that pales in comparison to the scrutiny of the swimsuit competition, which led to lost job opportunities and far too many strangers contacting me online.

This isn't the first beauty pageant to change their tune. Back in the summer of 2016, I initially wrote this article in praise of the Miss Teen USA organization for replacing the swimsuit competition with an athleisure component.

Looking back, I realized that the entire swimsuit portion of the competition is based on judging minors — girls who are 18 and under (and some as young as 14) — on how they look in bikinis. It is one-third of the contestant's overall score.

These girls aren't just being overtly sexualized, with photos that live on the internet forever, they are under extreme pressure to be as thin as they can get.

RELATED: Why Miss Teen USA pageant is getting rid of its swimsuit competition

At one of the last pageants I competed in — that wasn't affiliated with Miss Teen USA — we were forced to practice dance routines and walk in formations for 13 hours a day, spending a week straight with little to no breaks for food. By the time finals came around, I had lost so much weight that my dress had to be hemmed since it now hung so loosely, I was tripping over its chiffon skirt.

I wasn't the only one feeling stressed and weak. During the final show, one of the girls in the top five actually passed out on stage.

A close friend of mine won a state title, but by the time she showed up at nationals, she had lost almost 20 pounds and was addicted to laxatives. Since then, she has been in and out of the hospital for problems stemming from her eating disorder. I watched her deteriorate from a healthy, intelligent, vibrant young woman to a frail person who was full of anxiety and self-doubt.

The swimsuit competition was always my least favorite parts of the pageant. In addition to the walking-around-in-a-bikini-and-heels situation, an over-the-top spray tan is basically mandatory so that you don't get washed out from the stage lights. Even more comical was the fact that my strawberry blond hair nearly matched my orange skin. It was terrifying in person.

To top it off, the bikini gets glued to your skin so that nothing slips out on stage. All I have to say is that glue is very tough to get off.

I did work out especially hard for the bikini portion, but I've always had hips regardless of my weight. Most of the girls who competed and placed high on a state or national level had no hips — their bodies were straight up and down, which always made me feel ashamed of my curves. It wasn't until years later that I realized how foolish that was and learned to love my body as it is.

After the pageants, I received hundreds of messages on Facebook from strangers who had seen my picture online. I'm still not thrilled about the fact that there are photos of me in a bikini floating around on the internet.

It effects me even know as I often feel judged, like I have to prove that I'm smart enough to override the stereotype of a pageant girl. One internship interview for a large media company was canceled within 10 minutes because the interviewer found out that I had competed in pageants. Her assistant called me later and recommended that I not tell anyone about my history if I wanted a career in the industry.

Despite the downsides, competing in pageants did help me learn how to love myself. My experiences helped spark my interest in communications and sharing stories, and helped me identify and pursue my goals. Once I did land job interviews, my background preparing for the rigorous question-and-answer sessions in pageants set me up to succeed, teaching me to handle any question thrown my way. The competitions also taught me how to remain calm in stressful situations and helped me overcome my shyness, which had been holding me back.

I don't regret a moment of competing, even if I eventually wondered why complete strangers were deciding whether I was worthy based on how well I walk, talk and look in a bikini.

I didn't walk away with any scholarships (pageants don't offer as many prizes as you would imagine), but it still opened up a lot of other opportunities and introduced me to lifelong friends. I had endless laughs and made positive memories that will stay with me forever. I don't regret a moment of competing, even if I eventually wondered why complete strangers were deciding whether I was worthy based on how well I walk, talk and look in a bikini. I didn't feel like those strangers could figure out who I was from a quick interview or watching me on stage wearing 10 pounds of makeup.

Given the chance, I would do it all over again. But after stepping out of the pageant world over the past couple of years, I'm left with one question: Why are we judging young women at all?

Women should be proud of their bodies — and of being fit and healthy. The winner should be crowned based on her personality, speaking points, platform and poise rather than how good she looks in a bikini or how many meals she's missed.

I think removing the bikini competition is a step in the right direction for empowering women to feel confident about more than their looks.

At this point in my life, a crown isn't part of my career plan. But I'm glad to see that the Miss America organization and the Miss Teen USA organization are making changes in how they operate in an effort to empower women and reward healthy behaviors.

Because here's what no teenager (or grown woman) should have to give up for a pageant: her job prospects, her self-esteem or her health.