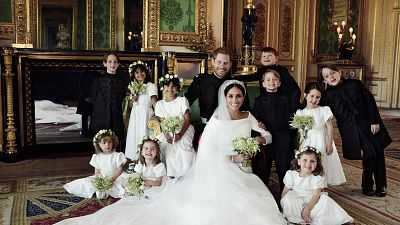 A picture released by Kensington Palace on behalf of The Duke and Duchess of Sussex on May 21, 2018 shows Britain's Prince Harry, Duke of Sussex, (CL) and his wife Meghan, Duchess of Sussex, (CR) posing for an official wedding photograph with (L-R back ro   -   Copyright  AFP/Getty Images
By Randee Dawn  with TODAY Lifestyle  •  Updated: 24/05/2018

If you want everyone smiling in a wedding photo — especially young children — photographer Alexi Lubomirski has a trick up his sleeve.

It turns out that a hard-shell chocolate called Smarties , was the trick to wrangling the youngest attendees, including Prince George, 4, and Princess Charlotte, 3.

Candy also apparently worked magic on many of the grown-ups in the room.

"[The children] were being bribed with one Smartie here, one Smartie there," Lubomirski told Reuters. "So as soon as the kids came on to the set, I immediately just shouted out, 'Who likes Smarties?' and then everybody, hands up, smiles; even some adults put their hands up, so that was our magic word of the day."

Lubomirski, a Polish prince himself who now lives in New York and shot the couple's engagement photos, also made magic with the duke and duchess themselves in capturing less formally-posed shots.

He explained how they were outside Windsor Castle with the sun setting after a very long and heightened day. The photographer gave them permission to leave, but asked them to sit on some stairs first.

"It was just one of those magical moments," he recalled. "She just slumped in between his legs. "And there was this moment where they were laughing, because they were joking about how they were exhausted and finally it was over."

He added, "It wasn't until I actually got back to the hotel that I looked at it, and it was just like, amazing. So, one very happy moment."

For Lubomirski, having a happy family dynamic aided in getting some great pictures.

"The atmosphere in the room was obviously very joyful; there were a lot of smiles," he recalled. "It was like a family room after the wedding. Some parents were trying to wrangle their children, other uncles and aunts were talking to their nephews and nieces. It was a family."