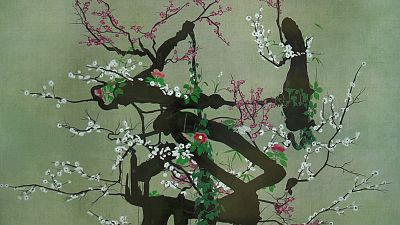 To celebrate 160 years of diplomatic relations with Japan, France will host Japonismes 2018, souls in resonance an exhibition of 50 events dedicated to Japanese culture.

Among the events will be the Jakuchu exhibition at the Petit Palais, the Yosakoi festival at the Jardin d’Acclimatation in Paris in October, the Manga Toyko exhibition at La Villette and 100 Japanese films at the Cinémathèque française.

This series of events echoes the craze that French artists had for Japanese culture during the second half of the 19th century.

I want to create a universe that interacts with visitors

Before these Japanese works and artists make the trip to the Paris region, Euronews went to Japan to get a feel for what to expect.

In Tokyo, on the artificial island of Odaiba, we visited the future museum “teamLab Borderless”, entirely dedicated to digital art. It is the brainchild of the group teamLab.

Founder Toshiyuki Inoko explained how the idea of this museum was born: “Men move in the same way that we are walking right now, men move and perceive their environment with their bodies.

“I want to create a universe that interacts with visitors. Borders are concepts created and enforced by humans, but originally the elements interacted naturally without barriers between things,” he added.

Describing another piece, Inoko said: “Here, thousands of flowers will appear and visitors will be completely disoriented, they will wonder where they are. It will be a room where holograms will be projected into space and we’ll go inside to get lost. The holograms will play instruments and dance freely without a conductor.”

Clear the notion of frame

The teamLab adventure started in 2001. Toshi Inoko had just graduated from the University of Tokyo with a degree in Applied Mathematics and Physics. With four students, he set up his own digital creative company. Seventeen years later, teamLab has nearly 500 employees.

As Inoko presented an animated work that occupies a whole wall in the premises of his company, he explained: “Every day, this work changes.”

“Three days ago, it was a snowy landscape and there, the snow is melting, in a week, there will be more snow,” he continued, before focusing in on a specific part of the painting.

“There, you see a character who wears a lantern because night has fallen. Soon, it will be so dark that there will be no one left, and tomorrow morning you will see people getting up to cultivate the paddy fields,” he revealed.

“For me, Rimpa invented a painting style that erases the notion of ‘framework’”, says Inoko. “And what we try to do with our works is to abolish the notion of framework so that our creations extend to infinity.”

Attached to the oldest Zen temple in Kyoto, the windscreen of the God of the Wind and the God of Thunder is considered the founding work of the Rimpa School. In early October, it will travel to Paris for the first time, for the inauguration of an exceptional exhibition.

Yoshiyuki Hosomi, director of Hosomi museum, described it to us: “One has the impression that to the right, the God of the Wind takes the wind from his bag and rushes towards the centre and on the left, the God of Thunder makes thunder roar and that it really descends from the sky towards the ground. This is a painting in movement whereas generally Japanese paintings are very fixed.”

This painting breaks with tradition, he noted, saying: “From the moment these two Gods stood on this screen, the history of Japanese painting changed.”

Custodian of one of the most important Rimpa collections in Japan, Hosomi has agreed to lend works by Sotatsu, Korin and Sekka, three generations of emblematic painters of the genre to the Cernuschi Museum in Paris.

The masterpieces of the Rimpa school in Kyoto can be seen during the exhibition “The treasures of Kyoto, three centuries of Rimpa creation” from 26th October 2018 to 27th January 2019 at the Cernuschi museum in Paris.