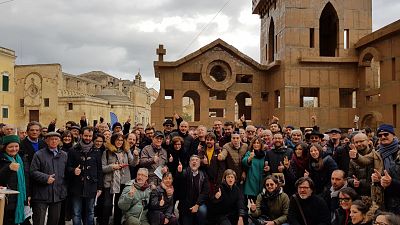 On 19th January 2018, a year before Matera is to become European Capital of Culture, throngs of locals and visitors took to the streets of this south-eastern Italian city, located in the southern region of Basilicata, to celebrate and become artists and spectators at the same time.

The event, entitled "Meno uno", or "Minus one", brought thousands of people together to partake in the work of French artist Olivier Grossetête. Since 2002, this renowned artist has specialised in the construction of monumental structures in cardboard which have participatory and playful elements for the public in their construction and demolition. For two days in Matera’s central square the Piazza Vittoria Venetto, associations, schools, locals and visitors from the region and abroad took turns at putting together the cardboard bricks and recycled paper that form the basis of the artwork.

This cardboard church was the ephemeral witness of some of the very values which the Matera 2019 project will promote: solidarity, intergenerational sharing and the protection of the environment. It became the symbol of a culture firmly rooted in the past yet resolutely turned towards the future. A symbol too, of the fruitful cooperation between the local community and the European know-how that led to Matera becoming one of the two European capitals of culture for 2019.

For Paolo Verri, the director of the Matera Basilicata Foundation 2019: "The playful dimension, which the great historian Johan Huizinga considered in 1938 as fundamental in the creation of local cultures, was at the centre of the event. We chose to carry out an action directly involving the community, to create something unique and grandiose from a simple and inexpensive material. And the participation of all far exceeded our expectations."

"Meno uno" also welcomed dancers and musicians. It ended with the demolition of the building which, by then, was covered with personal messages left on its walls by the participants.

The inauguration of Matera as European Capital of Culture, a title that the city will share with Plovdiv in Bulgaria, will take place on January 19, 2019. The Italian city, famous for its troglodyte dwellings and considered to be one of the oldest inhabited cities in the world, will then be positioned at the crossroads of all European cultures, united under the symbol of sharing and cultural exchange.