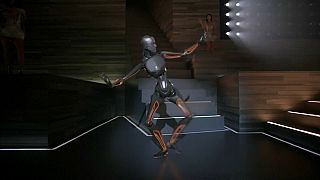 The new year has only just started but Justin Timberlake isn’t wasting any time in taking it by storm.

The singer's just released his latest single, "Filthy," from his to-be-released album Man of the Woods, which is scheduled to drop on February 2nd.

Co-produced by Timberlake, Timbaland, and Danja, the electronic tune is the first taste of new music from Timberlake since his especially poppy 2016 single 'Can’t Stop The Feeling!'

That track debuted at No. 1 and earned him both a Grammy and an Oscar nomination,

The futuristic tune mirrors the music video which features Timberlake as a Steve Jobs-type, introducing his latest invention, which turns out to be a sexual android pop star that's actually a lot like Justin himself.

Timberlake also unveiled a 25-city North American tour to promote the release of his upcoming LP, starting in mid March.

Just two days after fans can buy and stream Man of the Woods, Timberlake will headline the Super Bowl halftime show, which he made infamous in 2004 after appearing with Janet Jackson.