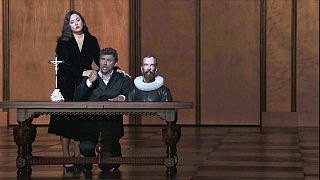 It’s Verdi’s darkest and most epic masterpiece: ‘Don Carlos’ is opening the season at the Opéra Bastille in Paris – an opera about love, idealism, betrayal and conspiracy set in 16th century Spain.

“It’s a great love story between her and Don Carlo… There’s this temptation, this passion that’s seething between them and will never be fulfilled,” says Yoncheva.

To mark the 150th anniversary of the opera’s premiere in Paris, it is being shown in its original version: Verdi first wrote it to a French libretto, reworking the score over two decades – though it is best known today in its Italian translation.

This is the first time that the masterpiece is performed at the Paris Opéra in French in three decades.

For Kaufmann, singing ‘Don Carlos’ in French for the first time is a real challenge.

This marks Yoncheva’s debut as Élisabeth.

“It’s a lyrical role, a complete role… filled with many colours,” says the soprano. “There is this magnificent aria… It’s a time for thought, an intimate moment for Élisabeth.”

Verdi based his epic five-act opera on a play by Friedrich Schiller. To Kaufmann’s regret, the opera contains no major solos for the lead role.

“What would I say to Verdi if I had attended the premiere 150 years ago?,” he repeats as we asks him the question. “It’s particularly interesting because Verdi had initially intended to compose a big aria for Don Carlos in the 5th act, but when he met the tenor he was so disatisfied with him that he changed his mind and wrote an aria for Élisabeth instead. So I would have said to him: ‘Please write an aria for the tenor, I mean, after all, the opera is called ‘Don Carlos’!’,” he exclaims in a burst of laughter.

In his sober production, director Krzysztof Warlikowski seeks to explore the psychology of Don Carlos’ character, an unstable and diffident man as seen through flickering cinema and video projections. On this complex character and the inevitable outcome of the tragedy, Kaufmann says: “You almost get the feeling that Verdi has found a way of opening up the heavens, and there are these stairs leading up. And both know it can only end in death.”

Happy faces after the first Don Carlos. I really have no words to describe the emotion. pic.twitter.com/PlioHhWXYL