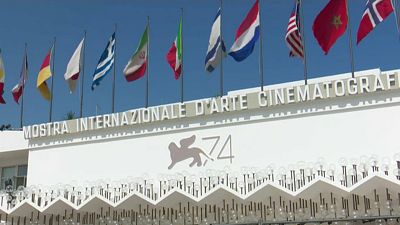 <p>There may not be as many women represented at this year’s Venice Film Festival as she would like, but jury president Annette Bening believes “things are changing.”</p> <p>The four-time Oscar nominated actress addressed the issue on Wednesday during the 74th annual Venice Film Festival’s opening press conference. </p> <p>Vivian Qu’s “Jian Nian Hua” (“Angels Wear White”) is the only film directed by a woman featured in competition this year. </p> <p>“I think that we as women have to be very sharp and shrewd and creative ourselves about what we choose to make,” says Annette Bening. “I know that most people I know, whether they are veterans, newcomers, whether they are men or women, most people struggle to get their movies made.”</p> <p>Bening is the first woman to chair the jury in more than a decade and was joined for the photo call by fellow jurors, actresses Rebecca Hall, and Anna Mouglalis and film makers Ildiko Enyedi and Michel Franco, among others. </p> <p>“This year we have outdone previous years in terms of talent,” says film festival Director, Alberto Barberawe. “We have perhaps the longest list, including great film makers, great authors, and great stars, both young and old, like Judy Dench, Julian Moore, Helen Mirren and Charlotte Rampling.”</p> <p>The festival’s 74th edition opens with Alexander Payne’s “Downsizing”, a satire starring Matt Damon about a couple who decide to shrink themselves to four inches tall.</p>