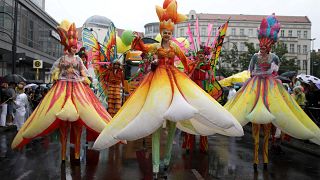 Tens of thousands of revellers took to the streets of Berlin on Sunday for the city’s annual Carnival of Culture.

While many defied the pouring rain it was difficult to get away from Saturday’s terror attack in London with security overshadowing this year’s event in the German capital.

The police were out in force, using their own vehicles to protect the street parade, but some party-goers expressed concern that concrete barriers had not been put in place.

“Of course there are ordinary steel barriers. But we don’t feel totally safe anymore,” one woman said.

“There’s certainly an uneasy feeling. Obviously it’s in our heads,” said another woman.

“It was a little bit of a concern in my mind today. But Berlin is really awesome, so I really like it here. I feel safe. That’s why I haven’t given in, I’ve come out.”

Now in its 22nd edition, organisers expect up to half a million people to have visited the four day event which finishes on Monday.

Officials insisted the recent terror attacks, both in London and Manchester, as well as Berlin late last year made them even more conscious of why they decided to go ahead with this year’s carnival.

The Carnival’s director Nadja Mau said: “You can’t just react to such incidents with purely more security. You have to react with content. What we are doing here, this carnival, speaks for democracy and togetherness.”