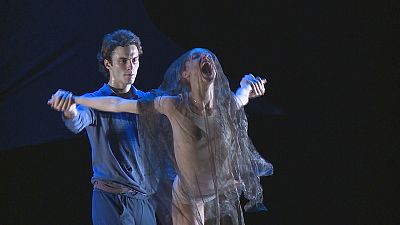 The Olympic city of Sochi is staging The Winter International Arts Festival.

It has become one of the cultural highlights of the Russian Black Sea resort. It is the festival’s 10th anniversary and traditionally one day of the event is dedicated to ballet.

“This year the organisers changed the tradition and instead of showing well-known classical ballets as they have done every year they staged works of neo-classical and contemporary choreography,” explained Maria Korenyuk, euronews correspondent at the festival.

Concerts of the Winter arts festival in Sochi were sold out https://t.co/zelrw8kDuQpic.twitter.com/HDhmHqaien#news#Russia

Dorothée Gilbert and Mathieu Ganio are famous classical ballet dancers, stars of the Opéra National de Paris but in Sochi they formed a duo in a contemporary performance of ‘Tristan and Isolde’.

This one-act ballet, created by a choreographer Giovanni Mancini, was inspired by the self-titled musical drama of Richard Wagner.

Although Wagner’s opera includes almost a dozen characters, the ballet has been created for just two characters.

“It’s a ballet which isn’t particularly classic, it’s a little bit contemporary, it’s precise, but there is an enormous amount of movement of the head and upper body. It’s deconstructed compared to classical ballet,” opined Dorothée Gilbert.

The imPerfect Dancers Company staged a sequel to Puccini’s opera ‘Madame Butterfly’. With a contemporary dance, they told of what happened to Cio-Cio-San’s son after the dramatic end of Puccini’s work.

A boy born to a Japanese geisha and U.S. Naval officer was raised in the USA after his mother committed suicide.

The performance, based on the music of Puccini, Handel, Richter, Beethoven, and American Philip Glass, impressed not only with powerful artistic expression, but with the symbolism of the costumes.

“The kimono is the connection between the soul of Butterfly and the life that continues to go on, it’s the blood of his mother that continues in the body of her son,” said Walter Matteini, artistic director, ‘imPerfect Dancers Company’.