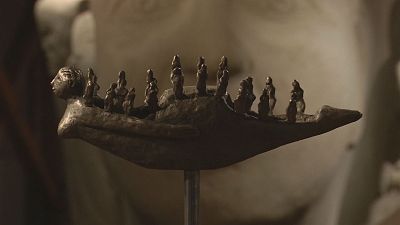 Lifeboat sculptures, crafted by Norwegian artist, Marit Benthe Norheim are one of the highlights of the cultural programme of the Danish city of Aarhus, which is this year one of the European Capitals of Culture.

The three 12 metre long floating sculptures arrived in Denmark’s second-largest city last October and are now the object of an exhibition at the the Women’s Museum.

The figures are preliminary works for the project entitled ‘My Ship is Loaded with Memories’ which features three lifeboats dedicated to women.

There are 18 figureheads, each portraying a real-life woman who has roots in different cultures. The sculptures also share a common thread: age.

“I wanted to really emphasise that we all are in the same boat, whatever place we’re coming from and that the story of women, here they have in common that they’re all past 70 years of age, and they come from different cultures, and have related to other cultures than their own, in different ways,” explained artist Marit Benthe Norheim.

The 18 women immortalised in Benthe Nordhem’s work have roots in 27 different nations. While some moved for love, others were forced to leave their homeland due to conflicts.

“Quite a few of them have settled because of, they actually represent eight different wars. And they have all survived the wars and believed in the future and in peace. So, I think it’s an important story, or stories to tell.

‘By bringing all these women’s stories, that are about love and suffering and a lot of similarities, even though they’re so different. That will also teach us or give us some of the same hope that I think in a way they represent,” added Marit Benthe Norheim.

While the sculptures are set to be ‘beached’ and exhibited at the Women’s Museum until April, there are plans to take the real lifeboats back out on the water soon. Next expected destination: Germany and then the Netherlands later this year.