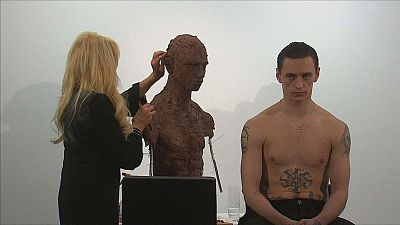 The dancer Sergei Polunin shot to international fame when in 2010 he became the Royal Ballet’s youngest ever principal.

Two years later he resigned saying he had become so unhappy that, “the artist in me was dying.”

Since then he has pursued other artistic projects like sitting for the renowned sculptor Frances Segelman.

“I think dancers are not looked after really well, I don’t think they are treated the way they should be treated and you know my passion and my goal is to bring dance to the same level or higher than a sport or film industry or any other industry,” he said.

Frances Segelman is considered one of the most successful sculptors in Britain having previously sculpted HM The Queen as well as HRH The Duke of Edinburgh. She said it was Sergei Polunin’s rebellious style that drew her to him.

“Well I saw a photograph of him and I just thought he would make such a wonderful subject, the fact that he has these tattoos and it’s unconventional. It excited me,” she explained.

The artistic project which propelled the dancer’s name around the globe and beyond the world of classic ballet, was his collaboration with the renowned American photographer and music director David LaChapelle. Their dancing video “Take Me to Church” had almost 18 million views on YouTube.

The documentary “Dancer”, directed by Steven Cantor, showcased Sergei Polunin’s breathtaking talent. In it he started to question his existence and his commitment to dance just as he was about to become a legend.

Sergei Polunin returns to the Sadler’s Wells Theatre in London for five days in mid March with Project Polunin, a series of performances including the UK premiere of Vladimir Vasiliev’s ‘Icarus’ and ‘Tea or Coffee’ choreographed by Andrey Kaydanovskiy.