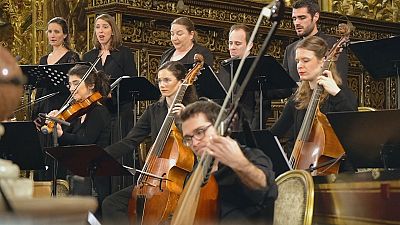 Baroque on the rock. It is the fifth edition of the International Baroque music festival in Malta

The genre started in the 16th century around the same time the first stones were laid in Valletta.

The success of the festival is down to the director, Kenneth Zammit Tobona who met with blank stares and skepticism when he first suggested the idea.

“Baroque? What’s Baroque? I said it’s in our DNA, it’s all over the place, we are a Baroque nation, we have a Baroque capital city, our towns and villages have Baroque churches, Baroque architectural wonders, except we never had sort of transposed it to music. Before up to 10 years ago it was Bach, Vivaldi, Händel and may be Scarlatti and then: Who are the rest? So basically we are on a voyage of rediscovery, we still are,” he told euronews.

Italian orchestra Concerto de’ Cavalieri, is regarded as one of Italy’s most vibrant and exciting Baroque ensembles. It opened the festival in the Church of St Mary of Jesus.

Four hundred years after its birth the music still has strong appeal in the 21st century.

“Baroque music is, as opposed to romantic music much more similar to our sensibilities because in the Baroque Period the aesthetic reverences changed and celebrates a better life, the greatness of life and the music wants to surprise the audience. When we play the music today, it sounds very contemporary to us,” said Marcello di Lisa the ensemble’s director.

It was the music of Europe’s aristocracy until in the 18th century when it became popular and enjoyed across the social scale.

A parody of the 17th century opera “Atys” by Jean-Baptiste Lully and Philippe Quinault was performed at the festival.

“Yes, absolutely, it is the Muppet Show of the time because we are making fun of the composers, of their works but also of all the whole theatrical thing of Parisian musical life, of all the artistic life as seen in the various shows. Absolutely everyone is mocked.

‘It is a tradition of the 17 and 18th century for the old women to be played by men and the women to be ridiculed by the men. Moliere did this often in his plays, the old women or pretentious women were played by transvestites,” said Jean-Phillipe Deserousseaux, stage director and actor.

A highlight of the festival’s opening was the performance of Marc Antoine Charpentier’s “Te Deum” by the Ensemble Correspondances from Lyon in the impressive St.John’s Co-Cathedral.

It is considered to be one of the finest examples of high Baroque architecture in Europe. The conductor of the ensemble reflected on the history of the music.

“It was when the world was emerging from the effect of wars, a complicated political and religious time. Imagine you live in the Middle East and from a universe which was so decimated something new was invented – new genres, new harmonies.

‘It was a music which wanted to please the public and it is perhaps for that reason it speaks to us today very simply and direct – perhaps more than romantic music or the composers who approached their work from an intellectual stand-point. There is something in the music which is very direct,” Sébastien Daucé told euronews.

The festival is now established as one of the island’s cultural highlights. Around 800 Baroque aficionados were in St. John’s Co-Cathedral for the performance of “Te Deum” by the Enslemble Correspondances.

Consider that the city has a population 7,000 and you can see the turn out was quite remarkable.

“With all it’s impressive Baroque buildings, this city is certainly a perfect platform to present the diversity of Baroque music to a large audience,” concluded euronews correspondent from the festival.