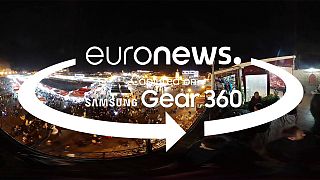 <p>Marrakech’s lively main square took on a Hollywood allure during the city’s annual film festival, when movie classics were shown on an open-air screen.</p> <p>Luc Besson’s ‘Subway’ <a href="https://www.rottentomatoes.com/m/subway/">was among the offerings</a> beaming out across the crowded plaza.</p> <p>This year the top prize, the Golden Star, was awarded to Chinese filmmaker <a href="http://variety.com/2016/film/news/the-donor-golden-star-marrakech-1201939024/">Zang Qiwu</a> for his move ‘The Donor’. </p> <p>To explore the 360° video use your mouse or swipe around the screen.</p>