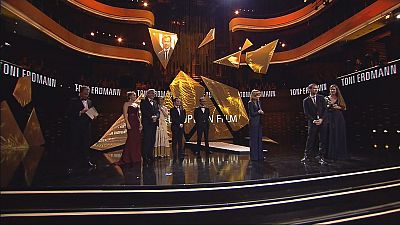 <p>It was a who’s who of the top talent in European cinema in the Polish city of Wroclaw the European capital of culture for 2016. And it was the cultured, shaken and stirred who gathered for the <a href="http://www.europeanfilmawards.eu/">29th edition of the European Film Awards</a>.</p> <p>Pierce Brosnan, once handed a license to kill, was honoured with the European Achievement Award in World cinema. The Irish actor and film producer was with his real-life Bond girl, American wife, journalist Keely Shaye Smith. </p> <blockquote class="twitter-tweet" data-lang="en"><p lang="en" dir="ltr">“I was always dreaming of movies, when I was 17 I had this burning desire to become an actor”<br /> standing ovation for <a href="https://twitter.com/hashtag/PierceBrosnan?src=hash">#PierceBrosnan</a> <a href="https://twitter.com/hashtag/efa2016?src=hash">#efa2016</a> <a href="https://t.co/fCEO6bPH0x">pic.twitter.com/fCEO6bPH0x</a></p>— European Film Awards (@EuroFilmAwards) <a href="https://twitter.com/EuroFilmAwards/status/807685001118699520">December 10, 2016</a></blockquote> <script async src="//platform.twitter.com/widgets.js" charset="utf-8"></script> <p>“To receive this glorious award, this affirmation for my work as an actor and producer could not come at a better time in life, believe me.”</p> <p>He starred in only four Bond films yet the 007 tag still sticks to him. Is he tired of that?</p> <p>“I don’t wanna get rid of it why should I get rid of it. It was a great image to be part of it, it’s a wonderful character that stood the test of time for 50 years. It’s a small group of men who played the role and deeply honored to stand beside the names that we all know,” he told euronews.</p> <p>French novelist, screenwriter, and actor Jean-Claude Carrière has worked with some of the most iconic film directors from around Europe. He scooped the Lifetime Achievement Award.</p> <p>“I am very very happy to receive this award. It brings back many things in my life. It is 60 years ago that I started to work in the cinema and still I am working and why not,” he told the audience. </p> <p>The film Toni Eerdman, a German/Austrian father/daughter comedy picked up five gongs including Best Actor, Best Actress and Best Director.</p> <blockquote class="twitter-tweet" data-lang="en"><p lang="en" dir="ltr">“It’s the first time that this award goes to a woman!” Maren Ade – <a href="https://twitter.com/ToniErdmannFilm"><code>ToniErdmannFilm</a> is European Film 2016! <a href="https://twitter.com/hashtag/efa2016?src=hash">#efa2016</a> <a href="https://t.co/fcPb2RU47S">pic.twitter.com/fcPb2RU47S</a></p>— European Film Awards (</code>EuroFilmAwards) <a href="https://twitter.com/EuroFilmAwards/status/807712922382299137">December 10, 2016</a></blockquote> <script async src="//platform.twitter.com/widgets.js" charset="utf-8"></script> <p>“I have the feeling that part of the success of the film is due to the fact that people like to laugh in the cinema and the movie makes you laugh even there is an additional layer – I wanted to mix the drama and comedy genre,” explained the director Maren Ade.</p> <p>Peter Simonischek won Best Actor. “Finally you have picked up a film award,” said euronews’ reporter Wolfgang Spindler when interviewing the star.</p> <p>“Yeah, that’s unbelievable, would you have thought so?” quipped the star and added: “Besides Maren Ade, I convinced some more people here. Honestly, it was really great to work with Sandra Huller as a partner – you just have listen.”</p> <p>Sandra Huller explained how their relationship in the film was developed. “ We tried out a lot and we found out a lot about father/daughter relationships, we player the scenes over and over, it was a little like theatre rehearsals.”</p> <p>‘A Man called Ove’ took the award for the best European comedy. The director Hanned Holm spoke on behalf of the cast with his own sense of humour: “So here is the prize for best European comedy and we are from Sweden so it’s a little bite rare. The secret is not to be funny. Now Ingmar Bergman is away so we suddenly can start to increase our comedy factor,” he said.</p> <p>Rolf Lassgård was also nominated for best actor for his role as the grumpy 59-year-old Ove, the nightmare neighbour next door. </p> <p>Italian Gianfranco Rosi has already won many awards for his documentary film but a European Film Award is special to him</p> <p>The film, ‘Fire at Sea’ which won the Golden Bear at this year at the Berlinale was shot on the Sicilian island of Lampedusa during the European migrant crisis. The documentary has, since the award in Berlin been released internationally to positive reviews.</p> <p>At the end of the evening there were wide smiles from the team which has made cinema goers laugh. Since ‘Toni Erdman’ premiered at this year’s Cannes festival, where it received the International Press Award it has created a real buzz. Now it has five European Film Awards to add to the trophy cabinet.</p> <p>“A glamorous award ceremony and a huge moment for the movie ‘Toni Erdmann’. And after this success on the European stage who would bet against an Oscar nomination,” reported Wolfgang Spindler from Wroclaw.</p>

The hot-runners in the race for Europe's top cinema awards