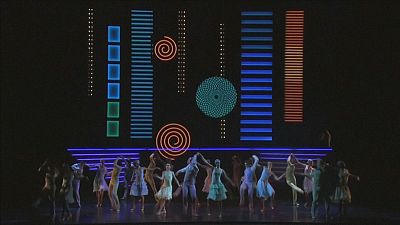 Russian choreographer Boris Eifman has taken up the challenge of using the plot of a complex psychological novel for a ballet.

“Up and Down” is based on a novel by the American writer F. Scott Fitzgerald in which personal tragedies are set against the backdrop of moral and psychological decline in society.

“‘Up and Down’ is based on Scott Fitzgerald’s ‘Tender is the Night’. This particular ballet is an important milestone for me. For quite a while I have been interested in psychoanalysis and Sigmund Freud in particular.

‘I’ve always wanted to approach this topic through movement and using the body to express this inner world of a person that is endowed with this specific mad fantasy,” explained the choreographer.

Members of the Eifman Ballet Saint Petersburg perform scenes from Up and Down at the Coliseum in London https://t.co/bIWyFC6G4gpic.twitter.com/PQdCxt20gB

The ballet features Lyubov Andreyeva as Nicole Diver and Oleg Gabyshev as the psychiatrist Dick Diver.

The ballerina says it was the psychological elements of the part which were the most challenging.

“It’s certainly a challenge, more of a psychological one for me than a physical one. This is because you need to cross the line, the inner line within yourself, to show the distortions of personality. You shouldn’t be afraid to show this distortion through grotesque movement – not to be afraid to look ugly,” she pointed out.

The two-act ballet, ‘Up and Down’ is set to the music of Gershwin and Schubert, with the stage settings switching between a jazz club and a psychiatric ward.

The production is the fourth by the Eifman Ballet of St. Petersburg to be performed by the company in London.

It will also be a celebration of the internationally renowned Company’s 40th anniversary.