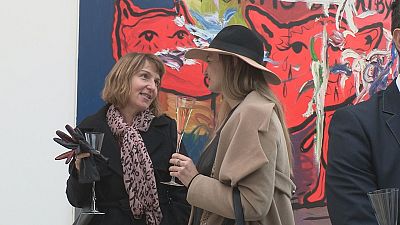 <p>‘Painting isn’t dead’ contends London’s <a href="http://www.saatchigallery.com/">Saatchi Gallery</a>. The exhibition “Painters’ Painters” features works of <a href="http://www.saatchigallery.com/artists/paint/">nine artists</a> all of whom have various distinctive approaches to explore working with their brushes. Their methods might then in turn be an inspiration for younger painters.</p> <p>The Saatchi Gallery was opened by Charles Saatchi in 1985 in order to exhibit his collection to the public and to boost contemporary art.</p> <p>“We love painting, Charles loves painting and we love the story it tells, we love the way you can work with many different mediums as a painter and young people are growing up using technology at their early age that they never had before. So they have a vague, easy relationship to it. Painting has become still set in the old school but for us and for the collection we always had a strong focus on painting,” explained Phillipa Adams, Senior Director and Curator, Saatchi Gallery.</p> <p>American artist Raffi Kalenderian paints portraits of his young, ambivalent-looking friends against an ultra-flat two-dimensional space. The Los Angeles based artist captures a total moment, not merely the subject in isolation from their environment.</p> <p>“Don’t be afraid just do it and go with the flow” is the 35-year-old’s credo. David Hockney was an inspiration for him when he started art school.</p> <p>“Then initially when I was learning how to do it I basically bought a bunch of paints and locked myself in the studio and just rubbed turpentine on my hands and just figured it out that’s really I think the only way you can learn, to see how long things dry, what things mix with other things – that’s my favorite part of working is like the experimentation, you don’t worry about the history, about what you can’t do you just like focus on things you can and what is the most exciting,” he told euronews.</p> <p>A personal history is behind English painter David Brian Smith’s work. He was brought up on a farm in the North of England but the family were forced to sell up to make ends meet when his father died.</p> <p>When his mother emptied the house before moving out she discovered a newspaper picture of the artist’s grandfather from the 1930’s when he was a shepherd.</p> <p>“Around the time my mother sent me this image of a shepherd amongst a flock of sheep. I was struggling to find anybody who would appreciate my work and I was quite angry and I think out of that anger – well, I said to myself I want to make a hundred paintings of the shepherd amongst a flock of sheep with the belief I could make them all different enough to use as a way, if you like, compositely to explore colour and dexterity and abstraction,” the artist explained. </p> <p>South African Ansel Krut initially studied medicine. He wanted to pursue a more creative career so was advised to become a plastic surgeon.</p> <p>In the end the 57-year-old studied at the Royal College of Art. His work can be dark – influenced by growing up during apartheid in his home country. There is humour too as in his “Arse Flowers in Bloom” painting. He begins his paintings with sketches. </p> <blockquote class="twitter-tweet" data-lang="en"><p lang="en" dir="ltr">Ansel Krut's 'Arse Flowers In Bloom' asks us to accept crudity and elegance together. See it free all weekend from 10-18h <a href="https://twitter.com/hashtag/PaintersPainters?src=hash">#PaintersPainters</a> <a href="https://t.co/TzlD0YkJ7R">pic.twitter.com/TzlD0YkJ7R</a></p>— Saatchi Gallery (@saatchi_gallery) <a href="https://twitter.com/saatchi_gallery/status/802429241857974272">November 26, 2016</a></blockquote> <script async src="//platform.twitter.com/widgets.js" charset="utf-8"></script> <p>“When I’m making my initial sketches, I try not to judge them to much , I simply try to make them and in a way you could say they are almost unconscious and then I look at the sketches later and I bring a kind of conscious thinking to them and then I think that one might work.</p> <p>‘I might not understand exactly why it will work but there is something in it that holds my attention and then I begin to develop the image and if it continues to hold my attention then I can make a painting out of it,” he explained.</p> <p><a href="https://www.theguardian.com/artanddesign/jonathanjonesblog/2016/dec/01/painting-comeback-painters-painters-saatchi-gallery-london">Amongst the artists in this exhibition</a> are Sidney born, Bjarne Melgaard with his rough, raw and very expressive graffiti like paintings. </p> <p>English painter Martin Maloney uses strong colours for his portraits and humourous subject matter.</p> <p>The exhibition “Painters’ Painters” with the works of nine painters from around the world, is at the Saatchi Gallery until the end of February.</p> <p>“To paint is the most ancient form of artistic expression of mankind – at the time we used to paint in caves today mostly in studios, but this exhibition at the Saatchi Gallery proves that this art form still attracts and fascinates people today,” reported euronews correspondent Wolfgang Spindler from London.</p>