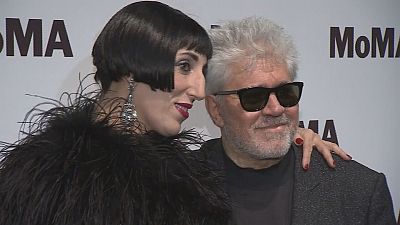 <p>Part of the party – snapshots for the media. Spanish film director Pedro Almodóva was being celebrated at the the MoMA – The Museum of Modern Art – with a retrospective of his long career and a special screening of his latest film “Julieta”.</p> <blockquote class="twitter-tweet" data-lang="en"><p lang="en" dir="ltr">.<a href="https://twitter.com/MuseumModernArt"><code>MuseumModernArt</a> recognizes successful international Spanish filmmaker Pedro Almodóvar with a special retrospective <a href="https://t.co/tBU7yBovPD">https://t.co/tBU7yBovPD</a></p>&mdash; Marca España English (</code>MarcaEspanaEN) <a href="https://twitter.com/MarcaEspanaEN/status/802921230408028160">November 27, 2016</a></blockquote> <script async src="//platform.twitter.com/widgets.js" charset="utf-8"></script> <p>The retrospective includes all of Almodóvar’s 20 feature films.</p> <p>“Pedro is someone who’s broken boundaries fearlessly now for many decades. I mean, the subversive nature of the sexuality of a lot of his characters, you know the focus on women.</p> <p>‘Those are things we take for granted that at this point belong in the cinema, but when he first started out those were pretty outrageous things to put at the forefront and it is just really time that we focus on that,” Rajendra Roy Chief Curator of Film at MoMA pointed out.</p> <p>The Oscar-winning director said he saw the night as kind of a homecoming.</p> <p>“The MoMA invited me for the first time in 1984 to present my movie ‘What Have I Done to Deserve This?’ as part of the MoMA festival and, you know, I was born for the American audience here so, this is very moving for me to be more than 30 years in the same place with a new movie,” explained Pedro Almodóvar on being honored by the MoMA.</p> <p>“Almodovar’s new movie,“Julieta”“:https://www.theguardian.com/film/2016/aug/28/julieta-review-pedro-almodovar-five-star-kermode, tells the story of a mother whose adult daughter joins a sect and breaks off contact. </p> <p>The movie, based on the short stories “Runaway” by Canadian author Alice Munro, premiered this year at the Cannes Film Festival.</p> <p>“Julieta” stars Emma Suárez, Adriana Ugarte and Almodovar’s long-time muse Rossy de Palma, who reflected on working with the director.</p> <p>“You know, in English “to play”. In French is “jouer”. In Spanish is actuar, acting, but the best thing with Pedro is to play because I am really playing with him, with him, working with him is really funny. We really enjoy and I abandon myself totally in his hands,” she enthused.</p> <p>Spain has selected Julieta for its submission in the Best Foreign Language Film Oscar race, it will be his sixth film to compete for an Oscar in that category.</p> <p>The Pedro Almodóvar retrospective runs at MoMA from 29 November through 17 December 2016.</p>