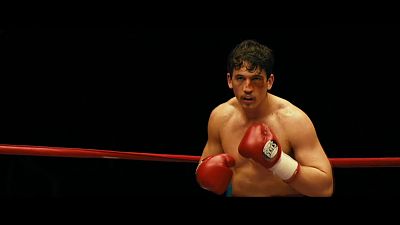 <p>‘Bleed for This’ tells the real-life story of US boxing champion Vinny Pazienza who, after breaking his neck in a car crash, defied the doctor’s advice and got back in the ring. He went on to win three more world boxing titles, creating one of the most incredible comeback stories in sports history.</p> <p><a href="http://www.vinnypaz.com/biography.html">Vinny Paz</a>, as he is known, attended the film’s Beverly Hills premiere, alongside ‘Whiplash’ actor Miles Teller who plays him in the movie. </p> <p>“Vinny was known as much for his personality as he was for his wins and losses, although he did have 50 wins and five world championships and fought a ton of guys,” said Teller. “He was a showman. He loved Muhammad Ali. That’s why he kind of wanted to get into boxing and he knew how to sell a fight. Yeah, he just had a certain charisma, he was an entertaining guy. And you just do your homework and you try and play him as truthfully as possible.” </p> <p>“He (Miles Teller) did a great job. He really did. And Aaron Eckhart played Kevin Rooney, I love Kevin Rooney, he was my favourite trainer of all time,” said the former boxing champion on the red carpet. </p> <p>Aaron Eckhart has won critical praise for his role as <a href="http://www.backstage.com/interview/aaron-eckhart-how-doubt-can-fuel-your-acting-career/">balding, overweight Kevin Rooney</a>, who coached Paz into winning another three world boxing titles. </p> <p>“This guy was so scary to me. He had a Staten Island broken nose boxer accent from the streets and I just – I’m not an accent actor per se and I just never broke it,” said Eckhart. “You know, as an actor it takes so much research and time to get close to and personalize a character that my opinion is why let them go away from you? Keep them close to you at all times and so I was in character pretty much the whole time, which I enjoyed very much.”</p> <p>The film’s director is Ben Younger of ‘Boiler Room’ fame. </p> <p>“I think that boxing is sort of this outsized but accessible parable for the challenges that any of us face. This one takes it to the next level because of Vinny’s comeback and the injury (…). You see what this guy did and everything just seems doable,” said Younger. </p> <p>Screened on the film festival circuit, ‘Bleed for This’ has garnered mixed reviews. Hailed as <a href="https://www.theguardian.com/film/2016/sep/03/bleed-for-this-review-miles-teller-vinny-paz-boxing-biopic">a successful return for writer-director Ben Younger</a> by some, it is described as a <a href="http://variety.com/2016/film/reviews/bleed-for-this-review-miles-teller-1201851556/">boring, miscast film (that) fails to connect</a> by others.</p> <p>Executive produced by Martin Scorsese, ‘Bleed for This’ rolls out in theatres worldwide from November 18.</p>