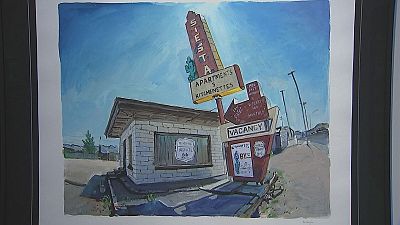 <p>He’s famously <a href="http://www.citylab.com/design/2013/06/808-cities-2503-shows-and-1007416-miles-staggering-geography-bob-dylans-never-ending-tour/5810/">been on the road for nearly thirty years</a>. </p> <p>Now a <a href="https://www.theguardian.com/music/2016/nov/03/bob-dylan-paintings-america-exhibition-the-beaten-path-london-halcyon-gallery">gallery in London</a> is showing some of the artwork of the surprise winner of this year’s Nobel Prize in Literature, Bob Dylan, in an exhibition entitled ‘The Beaten Path’. </p> <p>The most iconic of American troubadours, Dylan is not only a singer-songwriter but has been drawing and painting American landscapes as he has been travelling across the country. </p> <p>“He was born in small town America and, obviously, made his way to New York, but has done hundreds of tour dates a year, for many, many, many years. So he has crisscrossed the whole of America and often played in the smaller towns – and wanted to play in the smaller towns – so it truly is the beaten path and that’s what he’s been doing. And it shows, really, his love for America and all things American… It’s his view of America. It harks back to the ’50s, the ’60s, (Jack) Kerouac – the road and how important the road is, I guess, to all Americans,” says Paul Green, Halcyon gallery president. </p> <p>The exhibition includes sketches, watercolours and acrylic works of scenes as intimate as they are universal, the idea being, according to Dylan, <a href="http://www.vanityfair.com/culture/2016/11/take-a-virtual-tour-of-bob-dylans-london-art-exhibit">to create pictures that would not be misinterpreted or misunderstood by me or anybody else</a>.</p> <p>‘The Beaten Path’, a collection of works by Bob Dylan, runs at <a href="http://www.halcyongallery.com/exhibitions/bob-dylan-the-beaten-path">London’s Halcyon Gallery</a> until December 11. Dylan will be picking up his Nobel Prize in Stockholm on December 10th.</p>