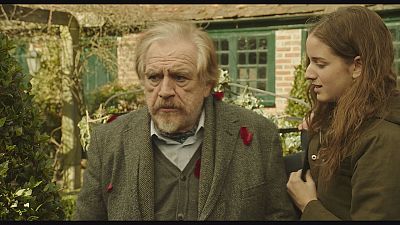 The Royal Shakespeare Company’s Brian Cox was the star on the red carpet at the Budapest premiere of his latest film ‘The Carer’.

In a role tailor-made for him, Cox plays Sir Michael Gifford, a grumpy old Shakespearean actor impaired by a degenerative form of Parkinson’s disease who makes life hell for his family. His daughter Sophia, played by Emilia Fox, decides to employ a new nurse to take care of him.

Talking about how he prepared for the role, Cox said: “I have a friend, a very close friend of mine, who is a comedian. He is a stand-up comedian, he is a genius. And he’s is one of the bravest men I know, because he has Parkinson’s disease, like Sir Michael (in this film), but he uses the Parkinson’s disease in his act. And he makes it as part of who he is. So he doesn’t apologise, he says: ‘This is me, I am this man, this is my disease, let’s go from there.’”

The new caregiver is Dorottya, a cheeky young Hungarian drama student who makes the old actor laugh and reminds him of his younger self. She is played by Austrian-Hungarian actress Coco König.

“It was a bit like playing myself,” she explains. “But I think that was something that János (the film’s director) really wanted as well, for me to be as natural as possible, and to do it the way that I would. I myself had a mentor whom I looked up to the same way Dorottya looks up to Sir Michael Gifford. But in the the end, when we stopped filming, I looked up to Brian in the same way. So it really was similar to what Ι was going through in that time in my life.”

Director János Edelényi said he was inspired by the loss of his own father and the way he used humour to deal with illness.

A British-Hungarian co-production penned with the help of the late British critic and author Gilbert Adair, the film has “opened to mixed reviews”:
http://www.spectator.co.uk/2016/08/the-carer-has-one-of-the-most-jarring-lines-of-all-time/ in the UK.

‘The Carer’, starring Brian Cox, Emilia Fox and Coco König, is out now in the UK, Australia, Hungary and Greece and hits theatres next week in Spain.