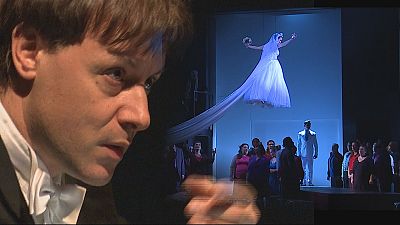 <p>Hector Berlioz, one of the great French Romantic composers, was hugely influenced by Shakespeare.</p> <p>And as the <a href="http://seenandheard-international.com/2016/10/toulouse-marks-the-400th-anniversary-of-shakespeares-death-with-a-berlioz-opera/">world celebrates the Bard</a> 400 years after his death, <a href="http://www.theatreducapitole.fr/1/saison-2016-2017/opera-612/beatrice-et-benedict.html?lang=fr">the Théâtre du Capitole in Toulouse</a> is staging a new version of “Béatrice et Bénédict,” Berlioz’s last opera, directly inspired by the play “Much Ado About Nothing.”</p> <p>Berlioz deliberately chose to focus on just one of the various plots of Shakespeare’s comedy: the sparring duo of Béatrice and Bénédict.</p> <p>The conductor, <a href="http://www.resiartists.it/en/artists.php?artist=203&section=bio">Tito Ceccherini</a>, spoke to Musica about his own approach to the piece.</p> <blockquote class="twitter-tweet" data-lang="en"><p lang="fr" dir="ltr">Nouvelle production du <a href="https://twitter.com/theatrecapitole"><code>theatrecapitole</a> : "Béatrice et Bénédict" d’Hector Berlioz<br>➡️ <a href="https://t.co/YadzOaw99s">https://t.co/YadzOaw99s</a><a href="https://twitter.com/hashtag/opera?src=hash">#opera</a> à <a href="https://twitter.com/hashtag/Toulouse?src=hash">#Toulouse</a> <a href="https://t.co/QhDQADYgfc">pic.twitter.com/QhDQADYgfc</a></p>&mdash; Culture 31 (</code>Cultures31) <a href="https://twitter.com/Cultures31/status/779649745514033153">September 24, 2016</a></blockquote> <script async src="//platform.twitter.com/widgets.js" charset="utf-8"></script> <p><strong>Tito Ceccherini, conductor</strong></p> <p>“Studying this opera for months has been exciting, but I’ve only overcome my doubts very gradually… even a few weeks before arriving in Toulouse I couldn’t say I’d totally ‘digested’ it yet. But then, while rehearsing, I finally had the feeling I could embrace every single one of Berlioz’s notes; even the ones I continue to find most surprising, yet inspiring, I now find them all necessary, after all.</p> <p>I feel Berlioz wanted to focus on love and psychology, and to explore themes such as the perception we have of ourselves, our relationship to others… This is not just entertainment, it’s like a needle touching key nerves.</p> <p>This is a composer whose musical language is largely and deeply rooted in the Classical model, but Berlioz definitely evolves from those models, and enriches them. He’s clearly a composer who’s always looking for new ‘paths’ so as to avoid the obvious ones. But because his musical phrases, his harmonic ‘paths’, seem pretty classic at first, I was somewhat frustrated, and a little puzzled, as some start in a way you think you can predict but then end in a totally different way than you expected.</p> <p>Still, there is such consistency in this piece… And the score is just fireworks in terms of ideas and the joy of making music… it’s fun from beginning to end!</p> <p>The aria of Béatrice is an extraordinary piece; there, too, there’s the dramatic element; the sentimental element; and the passion, the enthusiasm… and the final part of the aria has that brio, that vivacity, which is the ultimate characteristic of this opera.”</p>