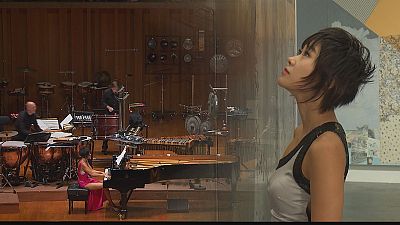 To the outside observer, Yuja Wang, may seem more like a Rock ‘n’ Roll star than a concert pianist. With her outlandish dress sense and shock of black hair that would make Sid Vicious weep, the Chinese musician does not necessarily fit the stereotype of a classical virtuoso.

In person, the 29-year-old seems an effulgent, if slightly idiosyncratic character. Her smile is infectious, her laugh even more so, and she doesn’t immediately appear to be the one who is currently turning the world of classical music on its head. Yuja Wang’s playing bears all the hallmarks of a gifted pianist: an energetic joie-de-vivre coupled with unbelievable dexterity; a genius that transcends the tradition of classical piano. Such brilliance from the young starlet has earned her a spot at Beijing’s National Centre for Performing Arts (NCPA) as its first artist in residence, comprising six curated concerts, as well as masterclasses, lectures, and more.

But beneath the bright and bubbly persona and incredible skill, there is a Daedalian, almost contumacious streak to the musician.

Born in 1987 in Beijing to a dancer mother and percussionist father, Wang began studying piano at the age of six. A year later she began a three-year course at the Chinese capital’s Central Conservatory of Music, after which she travelled alone to study at the Mount Royal Conservatory in Canada. By 15 she had been accepted into the Curtis Institute of Music in Philadelphia, studying under renowned piano teacher Gary Graffman.

According to Graffman, while her talent and technique were undeniably impressive, it was rather the “intelligence and good taste” of her interpretations that initially set her apart from the rest. Describing her as incredibly self-critical, he has “previously praised her speed at which she learned repertory, her broad range of artistic interests, her sense of humor and her ability to produce a gorgeous sound&.

Yuja has made a habit of doing – and being – the unexpected since exploding onto the scene in the late nineties. Known for her intricate delicacy, her fastidious attention to musical detail and her tireless work ethic, she has taken on Bela Bartók’s willfully complicated, and at times perhaps even tortuous ‘Sonata for Two Pianos and Percussion’ for her first appearance at the new concert hall.

The music of Bartók, whose complexities – much like Yuja Wang – are often difficult to grasp, and even more so to unravel, does not always fall easily on the untrained ear. Hailed alongside Franz Liszt as one of Hungary’s greatest composers, and indeed one of the most important of the twentieth century, Bartók is lauded as a misunderstood pioneer of ethnomusicology – the study of various different cultural approaches to creating music – but his music has been referred to as strange, bleak and fiendishly difficult to master.

In a review written in British newspaper The Observer in 1923, writer Percy A. Scholes wrote of the composer’s heavy touch: “If Bartók’s piano compositions should ever become popular in this country… I believe that it will be found that piano manufacturers will refuse to hire out pianos for the recitals of its alumni, insisting that these shall always be bought outright, and the remains destroyed on conclusion.”

Tearing up the rule book

Perhaps, then, Bartók’s compositions are perfect for the woman who is currently tearing up the rule book when it comes to classical music. She has teamed up with renowned percussionist Martin Grubinger to create a unique variation, using the traditional piano and a marimba to present an original take.

“I think that this arrangement of the Bartók Sonata for Two Pianos and Percussion is going to be historical,” Wang said, “because they made it into two marimbas for the second piano.”

“For marimbas to play at that speed it requires lots and lots of rehearsal, and lots of very fast reflexes.”

“I love playing with singers, I love playing with strings, but with percussionists it’s a completely different language,” she continued. “The way they think about music is very straight, very tight; I kind of have that way of thinking of music as well, and it’s really kind of stretching me out of the comfort zone to reach that level. It’s pretty cool! Besides, they are very loud!”

Wang’s parents instilled in her a passion for music, and always encouraged her playing but never in a dictatorial manner. Her percussionist father’s skill no doubt came to her aid when she decided to take on this complex piece of music.

“My dad is really good with rhythm,” she told the New York Times in 2012. “He was always correcting me and telling me, ‘You’re rushing.’ That’s my weakness. Even back then I was rushing.”

One thing that can be said about Yuja Wang is that she is clearly up for the challenge. As the first artist in residence at Beijing’s stunning National Centre for Performing Arts, she takes on a tremendous amount of responsibility. The giant titanium-laced glass marble that sits resplendent atop a serene artificial lake provides the ideal setting for a ground breaking performance.

Designed by French architect Paul Andreu, the 430 million euro building triples up as a concert hall, opera house, and theatre, boasting a total of 5,452 seats with an iconic image to rival the opera house at Sydney or Milan’s Teatro alla Scala.

She has previously likened being a classical musician to being a pop star in China.
“I’m very flattered, lots of young girls come up to me… I think they love the fashion sense in me, but they also love the daring… the daring confidence, maybe, like, a little sassiness … I think it’s really daring to play with four percussionists!”

Much has been made of her dress sense – although it has earned her as much criticism as it has adoration. Nothing will detract from the sense of occasion, however, and Wang has done nothing if not earned her place at the NCPA.

The pianist said: “This is a true homecoming for me. Music in China is at such an exciting point in its evolution, and I feel fortunate that the NCPA has invited me to be part of that. I finally have the opportunity to share my music with fans and friends from my homeland, and to play incredible works with childhood friends who are now members of the NCPA Orchestra.”

Yuja and Martin will be playing together again on the tour “Martin Grubinger meets Yuja Wang”, which will take place December 13-27 (2016) in Vienna, Munich, Zurich and Tel Aviv.

Musica wishes to thank the Ullens Center for Contemporary Art and The Robert Rauschenberg Foundation for granting permission to film in situ Yuja Wang’s interview as well as some of the works shown at the Gallery.