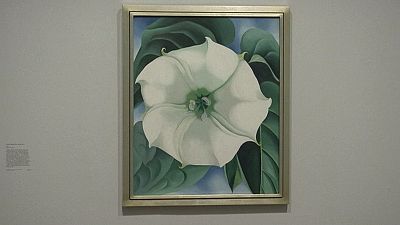 <p>One of the highlights of Tate Modern’s new retrospective exhibition dedicated to Georgia O’Keeffe is a piece called Jimson Weed, White Flower.</p> <p>It’s the most expensive painting by a female artist ever sold at an auction and one of the most expensive works of American Art. </p> <p>It fetched $44,405,000 at Sotheby’s American Art sale on November 20, 2014.</p> <p>O’Keeffe (1887-1986) is best known for her paintings of blooming, vibrant magnified flowers, but that’s not all she painted, says Cody Hartley from the Georgia O’Keeffe Museum.</p> <p>“The flowers, of course, are the best-known – that’s true in the States as well as overseas – but this show makes it so clear that the flowers are just a portion of her creativity, just one small subject in a life of amazing material.”</p> <p>The show includes 115 major works, along with preparatory sketches, sketchbooks and photographs.</p> <p>O’Keeffe, who died in 1986 aged 98-years-old, had an exceptionally long career.</p> <p>It took her from her native Wisconsin to bohemian New York – where she absorbed and practised abstraction and surrealism – and finally to New Mexico, whose fiery landscapes inspired her later work.</p> <p>One of the exhibition’s star works is “From the Faraway, Nearby,” a lavishly antlered skull in a mountainous landscape tinged a delicate blue, pink and orange.</p> <p>Tanya Barson, Exhibition Curator at Tate Modern, explains why O’Keeffe was intrigued by the American landscape: “She loved this sense of horizon, of infinity, of wide-open space. </p> <p>“And she called this ‘The Faraway’. So the landscape in New Mexico embodied this concept she had that she called ‘The Faraway’ and I think she thought that that was what was unique about the American landscape, this sense of space.”</p> <p>The Tate’s retrospective is the largest and most comprehensive exhibition of O’Keeffe’s artworks ever staged in Europe. </p> <p>It runs until 30 October 2016 at London’s Tate Modern. It moves to Bank Austria Kunstforum in Vienna from December 7 to March 26, and the Art Gallery of Ontario in Toronto from April to June 2017.</p>