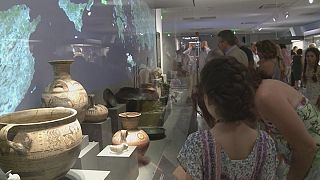 Situated 30km off Rethymnon, Crete, the necropolis of Orthi Petra is part of the wider archaeological site of ancient Eleftherna, a town with continuous habitation from 3000BC to the Byzantine years.

Situated on the western slope of the ancient Eleftherna hill, it serves as a window to the Homeric world.

The finds of the archaeological dig often coincide with the Homeric verses. The necropolis was fortunate to survive almost unscathed.

Nicholas Stampolidis, Archaeologist, from the University of Crete, says: “The Orthi Petra necropolis in ancient Eleutherna is, till now, the most important necropolis of the Dark Ages.

“It portrays essentially the verses of Homer’s Iliad. As the poet describes the construction of Patroclus’ pyre, we find it exactly the same way in the Orthi Petra cemetery. Consequently we have here the visible part of history.”

Our Euronews correspondent Yorgos Mitropoulos says: “In the Orthi Petra necropolis the findings are really unique and impressive.

“Among them, there is this cenotaph memorial. It is the first tomb of the Unknown Soldier in European history. It is dated in 670 BC.”

After decades of excavations, Crete’s Museum of Ancient Eleutherna is ready to showcase its locally-harvested treasures.

It is the fourth such museum in Greece on the site of a significant ancient city.

The museum has three sections which cover the years during which Eleutherna flourished (3,000 BC-1300 AD), and displays artifacts from everyday life in addition to works of art covering the whole spectrum of its history, which includes the geometric, archaic, classical, Hellenistic, Roman, Byzantine and early Byzantine periods.

Section A is the largest, and includes artifacts in connection with the social, political, religious and private lives of the citizens of Eleutherna, plus items imported from other Cretan cities and regions such as Attica, the Peloponnese, the Cyclades, the eastern part of the Aegean Islands sea, Asia Minor, Cyprus, Phoenicia, Syria-Palestinian coast and Egypt.

Section B has items concerning religious life in the city dating from the early Iron Age up to the Byzantine period. It also has on display what is considered the first cenotaph, or war memorial, in human history.

Other sections include items from the city’s necropolis, including a mock-up of a funeral pyre as described by Homer (circa 900 BC). There are also displays of the garments and ornaments priestesses of Eleutherna wore, and a number of glass, ceramic, clay and bronze vessels and statues, among other items.

Stampolidis adds: “Among the most important findings is a burial in a stone-built structure. It contains the remains of four women, buried simultaneously in the beginning of the seventh century BC.

“There is a woman buried in a seated position. She was 72 years old, probably a priestess. There are also three younger women. All were buried with their rich grave gifts: clay and bronze artefacts, fine pottery, gold jewellery and other gifts.”

One of the most important finding is the “Eleutherna Kore” which closely resembles the Cretan statue “The Lady of Auxerre” in the Louvre.

Experts believe they are “sisters”. They are both made by limestone from Eleutherna.

Alain Pasquier is one the most important historians in France. He specialises in Greek ancient art and was for many years General Curator of Heritage and director in the Louvre.

Pasquier says: “For me, Curator of the Louvre, I am now retired, but I have lived for 34 years with The Lady of Auxerre. I know now that it’s The Lady of the Eleutherna, of Elefterna”. And this is something very moving.”

The museum was officially opened by the Greek President Prokopis Pavlopoulos.

Against the background of mount Psiloritis, the Museum of Ancient Eleutherna is the first archaeological site museum in Crete. It is perfect to its last detail, says Mitropoulos.

“It’s a vessel that transports us back to prehistorical times.

“Yorgos Mitropoulos, from the Ancient Eleutherna, for Euronews.”