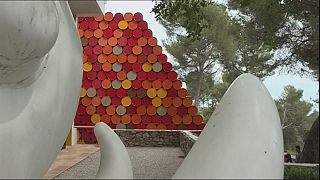 For 30 years, Bulgarian-born artist Christo has wanted to build a monumental ‘Mastaba’ – a type of ancient Egyptian tomb – out of oil barrels in the desert of Abu Dhabi.

This is an artist widely known as 'avant-garde,' with projects dating from 1967, who today at the age of 81 still has this incredible ability to reflect on the world, and to offer experiences

His project has just materialised on a smaller yet still impressive scale: nine meters high, 17 meters long and nine meters wide, the work is on display at the Fondation Maeght, a museum of modern art in the south of France.

Christo has been working with oil barrels for decades. He and his late wife Jeanne-Claude used them to barricade a Paris street in 1962, in protest against the Berlin Wall.

Over the years, the couple worked on various sketches of Mastabas. After Jeanne-Claude passed away in 2009, Christo worked on this one as a solo project.

“The first Mastaba was a bit like a sculpture of emotions, this Mastaba is really exploding in space. I made the proportions on purpose, this 60-degree angle is like a staircase towards the sky,” he explained.

Christo poses at the #FondationMaeght during the Mastaba exhibition. #AFPPhotopic.twitter.com/FayTtV5seK

The Mastaba is the latest & definitely the largest Christo-wrapped eco art installation ever https://t.co/EWOCMdORQI

Christo and Jeanne-Claude reached fame with their large-scale land art – wrapping up in fabric the Pont Neuf bridge in Paris, the Reichstag in Berlin, and “eleven islands”:
http://miami.curbed.com/2013/8/29/10207970/wolfson-moving-image-archives-christo-surrounded-islands in Biscayne Bay near Miami.

Olivier Kaeppelin, director of the Fondation Maeght, said of Christo: “This is an artist widely known as ‘avant-garde,’ with projects dating from 1967, who today at the age of 81 still has this incredible ability to reflect on the world, and to offer experiences.”

The exhibition also showcases 50 years of Christo and Jeanne-Claude’s work — including sculptures, sketches and photographs. It runs until November 27.