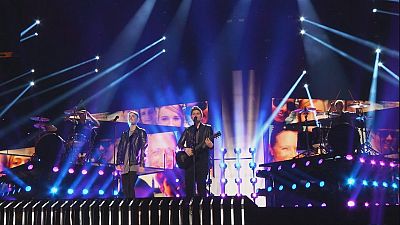 <p>Well, Europe is in the middle of a refugee crisis, has Greece wobbling and the euro under threat, faces a resurgent Russia in the east, and a resurgent far-right at home but, hey, we can still organise the best Song Contest in the world. Yes, it is Eurovision time again. </p> <p>The 61st edition of the song contest is taking place in Stockholm, Sweden, home of 2015 winner Mans Zelmerlow.</p> <p>“It’s like a big hobby of mine, I go every year, and this is actually my 11th Eurovision,” said one woman.</p> <p>“Its just madness, this week is absolutely the best holiday, you know, ever!” said a male reveller.</p> <p><strong>Happy chappies</strong></p> <p>Britain has a couple of likely lads for their entry, Joe Woolford and Jake Shakeshaf.</p> <p>“Its insane. its amazing to be here,” says Joe. Yes boys, but can you sing for euronews?</p> <p>“You want us to sing?” says Jake, “We are not singers!” So that’s all right then.</p> <p>Joe and Jake are a brand new musical duo, presenting their debut track for Britain,<br /> “You’re Not Alone”, an anthemic pop song with a universal message. </p> <p><strong>Homeboy looks to make good</strong></p> <p>Only 17, Frans Jeppson Wall is hoping his “If I Were Sorry” can retain the title for Sweden. Can the host country do the double? </p> <p><strong>Say what?</strong></p> <p>Spain’s candidate Barei wrote her song for the Eurovision Song Contest, “Say Yay!” along with Ruben Villanueva and Victor Pua. It is an up-tempo song with energy and strength that emotionally reflects the common struggle for self-improvement; a rallying cry for anyone who fights to accomplish their goals. </p> <p><strong>Up close and personal</strong></p> <p>Italy’s contestant, Francesca Michielin came second at this year’s Festival di San Remo which earned her Eurovision Song Contest spot. “No Degree Of Separation” has become a huge Italian hit. Will Europe like it?</p> <p><strong>We will shock you</strong></p> <p>Germany’s song is “Ghost” by Jamie-Lee Kriewitz, a 17-year old singer with her very own colourful style – and a strong voice! </p> <p><strong>Asking for it</strong></p> <p>The last of the big five, France, has Amir. His song “J’ai cherché” has enjoyed heavy airplay on the major radio stations in France and is already a hit. </p> <p>Forty-two candidates will slug it out for the 26 finals places during this week’s semi-finals. Then it is on to the main event…</p>