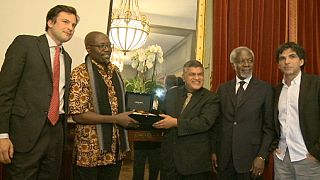 <p>Kenyan and Malaysian cartoonists Gado and Zunar have been awarded the <a href="http://www.cartooningforpeace.org/en/">2016 Cartooning for Peace Prize</a>.</p> <p>The accolade, which rewards cartoonists for their talent and commitment to freedom of expression, was presented at a ceremony in Geneva by the honorary president of the Swiss Foundation, former UN Secretary General Kofi Annan.</p> <p>“I am always amazed at the creative wit of these artists who with a single image can capture the paradoxes and absurdity of injustice of a complex problem more effectively than a hundred speeches. Artists like Gado and Zunar are taking risks for speaking truth to power. They deserve all the recognition we can give them which hopefully can also contribute to their protection,” said Kofi Annan. </p> <p>“It’s a great encouragement,” said Gado. “Because whatever you have been doing there are people who are behind you and there are people who recognise your efforts and that goes a long way in pushing you forward.”</p> <p>The two winners have often denounced government corruption and social injustice in their respective countries and have paid the price. </p> <p>Gado, whose real name is Godfrey Mwampembwa, was <a href="http://omgvoice.com/news/cartoon-legend-gado-sacking-nmg/">until recently</a> the accredited cartoonist for the Nairobi-based newspaper, the Daily Nation, one of the most important newspapers in Central and East Africa. He also draws for the Tanzanian Daily News, Business Times Express, and for the Sunday Tribune in South Africa. New African (United Kingdom) and Courrier International (France) often publish his work. His sketches depicting politicians as greedy and corrupt have won him a large public following but have also <a href="https://cpj.org/blog/2016/03/gado-blames-government-pressure-as-cartoonists-con.php">left him jobless</a>. </p> <p>“I think what we have seen in many African countries is the shrinking space of the media. This space is a contestant space and the challenge is always to protect that space,” he said. </p> <p>Malaysia’s best-known press and comic strip cartoonist, Zunar uses humour and derision to talk about abuse of power and corruption in his country. He is currently the object of legal proceedings and risks a 43-year prison <a href="https://www.indexoncensorship.org/2016/05/zunar-wins-cartooning-for-peace-prize-talent-is-not-a-gift-but-a-responsibility/">sentence for sedition</a>.</p> <p>His work is no longer published in traditional media despite the international prizes he has received, including the 2015 Human Rights Watch and International Press Freedom awards. </p> <p>“This award is very, very important for me because it can create pressure on the Malaysian government and also it will be an eye opener for the international community about my case and the level of freedom of expression and human rights in Malaysia,” said Zuna.</p> <p>The jury of the International Editorial Cartoons Prize is made up of the cartoonists Chappatte (Switzerland), Plantu (France) and Liza Donnelly (United States), as well as Kenneth Roth, Director of the <span class="caps">NGO</span> Human Rights Watch and the Genevan magistrate Guillaume Barazzone.</p> <p>Some one hundred cartoons by the laureates and other members of Cartooning for Peace are on display along the banks of Lake Geneva. Topics range from the environment to security, with the plight of migrants topping the agenda.</p> <p>“We see migrants arriving here and I think some of these drawings really show how these people got here,” said one visitor. </p> <p>“I like the idea that you bring in a different kind of art form to draw attention to political issues around the world and how they interplay with each other, especially bringing in humour to often really grave and disasterous situations that are happening all over the world,” said another, while a third visitor said: “I think caricature is a fundamentally important means of expression because it’s funny, it’s quirky, but it also conveys messages very effectively.”</p> <p>A year and a half after the Charlie Hebdo killings, cartoonists around the world continue their fight for freedom of expression in spite of threats and restrictions. </p> <p>The cartoons by the Cartooning for Peace laureates are on show along Geneva’s quai Wilson until June 4th.</p>