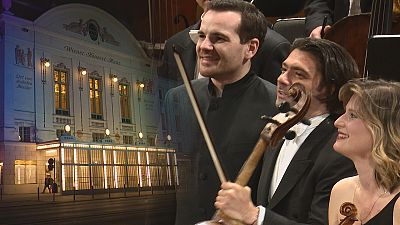 <p>Czech composer Antonin Dvořák’s Eighth Symphony, written in 1889, was like a balm in an increasingly strident, mechanising world. The music has recently cast its spell again over the Konzerthaus, during the Viennese stop of the <a href="http://www.tonhalle-orchester.ch/en/concerts/">Tonhalle</a> Orchestra’s tour. Talented young conductor Lionel Bringuier has again been winning praise for his work.</p> <p>Invited to Vienna to play with him were two top soloists: Lisa Batiashvili and Gautier Capuçon. Their performance of Brahms’ Double Concerto was mesmerizing.</p> <p>“It’s a piece full of humour and lightness at the same time, and our two soloists are so gifted at bringing that out. I think it’s like a dialogue, with the music rebounding from one instrument to the other. One only needs to look at the connection between them to feel that humour,” says <a href="https://allisyar.com/2015/11/20/a-chat-with-lionel-bringuier-about-the-la-phil-and-the-tonhalle-pierre-boulez-and-esa-pekka-salonen-yuja-wang-and-kanye-west-and-more/">Bringuier</a>. </p> <p>“I think very highly of Gautier. There was a time when we were both at the conservatory. I was thirteen and Gautier had just graduated, at seventeen. A few years later we met again on the stage: I as a conductor, he as a soloist. We love playing together!”</p> <p>Cellist <a href="http://www.musicweb-international.com/SandH/2009/Jul-Dec09/capucon_interview.htm">Gautier Capuçon</a> underlines the importance of friendship in music-making.</p> <p>“About this piece I think it’s important to say that Joachim, who was a famous violinist and a very close friend of Brahms’, at a certain time broke up with him. Now, this Concerto was instrumental to their reconciliation. So, the piece is like a real dialogue, and it carries a symbolic message about brotherhood, friendship and catching up on lost time,” he says.</p> <p>While chemistry between performers is critical, violinist <a href="http://www.nytimes.com/2015/02/01/arts/music/lisa-batiashvili-on-violins-ukraine-and-valery-gergiev.html?_r=0">Lisa Batiashvili</a> believes it all comes from the music itself. </p> <p>“I think it’s vital to share music, and for me music is more important than musicians, so I try to serve the music.”</p> <p>“Well, I’m off then,” jokes Gautier.</p> <p>“But I’m also inspired by my colleagues,” insists Lisa, “And it’s just so incredible when there’s so much energy on the stage, and we produce something which makes us stronger, and we manage to communicate in a new way with the public.”</p> <p>Apart from the music there is also Vienna to weave its magic over the occasion.</p> <p>“Vienna is very special to me. Of course, there’s Paris, but there’s also Vienna, the city where I studied, and where music is everywhere. It’s also a fact that there’s a special understanding of music here… playing Brahms in Vienna… at the same time it’s such a pleasure to know that this music really vibrates in the hearts of everyone here,” says the young man from Chambery in the French Alps. </p> <p>A shared love for music and mutual knowledge strongly bind Maestro Bringuier to his Zurich musicians.</p> <p>“What I love about my orchestra is that we have a very deep understanding, so a smile, a look, can work miracles, no need for sweeping gestures,” he says.</p> <p>“Especially with a symphony by Dvořák; a conductor doesn’t need to do everything, he only has to encourage his musicians, and they will themselves project the music into the hall, the aim being that the audience feels the emotion.”</p> <p>It is an approach that has taken Bringuier to an unusually precocious tenancy of an ambitious full orchestra, and one that is raising the Tonhalle’s profile.</p> <p><strong>Story produced and presented by Katharina Rabillon.</strong></p>