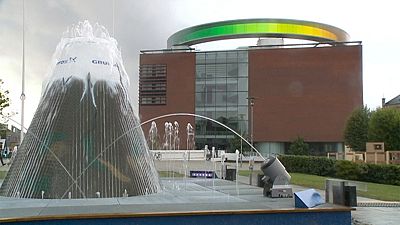 <p>The program of ​the Danish city of Aarhus evolves around the theme “Re-Thinking”. Re-thinking culture and rethinking infrastructure. ​Aarhus is in Denmark also known as the city of smiles​ an​d the culture life is already an important part of the city, where 40% have or are getting a university degree. ​​This demands a good program.​ </p> <p>Aarhus is the home to Aros – one of the Nordic countries most visited modern museums of art with the new city symbol, the ”Your Rainbow Panorama” on the roof by Olafur Eliasson – and to Moesgaard – the ethnological museum hosting historic Viking items and the world’s best preserved human body from 200 a.c.</p> <p>Aarhus 2017 will boost the cultural offers tremendously for residents and visitors alike. Among the program’s highlights so far is the modern ballet the “Tree of Codes” performed by the Parisian Opera Ballet and the modern dance Company Wayne McGregor in acclaimed collaboration and with the scenography created by the renowned artist Olafur Eliasson.</p> <p>Another signature event will be Watermusic, performed by big water cannons and 300 choir singers creating a dramatic musical performance inspired by the harbor’s cultural history and water as a life-giving element.</p> <p>The program also features an all year gastronomy program. Wassim Hallal chief and owner of Restaurent Frederikshøj, says that ”Our region is fairly unique in providing so many opportunities for procuring fresh produce in our forest, our bay and in our fields.”<br /> The products in the area include mussels, bacon, Nordic corn sorts and various cheeses.</p> <p>The program also presents an innovative outdoor-art project called the Garden, curated by Aros. The dynamic Aros director Erlend Høyersten, explains: “It is a big art festival stretching approximately four kilometers where the audience meets art in a total new way”.</p> <p>Aarhus and the Midjutland region has a population of 1.3 million people.</p> <p>Rebecca Matthews was appointed <span class="caps">CEO</span> of Aarhus 2017 in 2013: “There will be 12 full moon events and water light shows, that are expected to attract 15.000 people”, says Rebecca Matthews and continues: “Aarhus has the youngest population and the highest concentration of students in all of Denmark”. Former NATO’ Secretary General Anders Fogh Rasmussen, the Danish Queen Margaret and Crown Prince Frederik all took their university degrees in Aarhus.</p> <p>Rebecca Matthews feels, that “the big young audience creates a special energy and vibration in the city. What that means for the European Capital of Culture is, that we need to create a program, that is buzzing, that is full of energy, that is effervescent and that showcases the highest quality of arts and culture”.</p> <p>One of the biggest events will be the boat regatta with more than 10,000 boats that will take place at the same time as the European Championships in Fireworks.</p> <p>Aarhus 2017 full program will be announced in October 2016 and opening ceremony will be on the 21st of January 2017.</p>