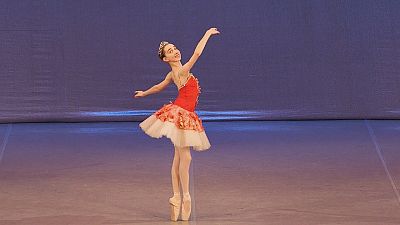 <p>Many young girls dream of becoming a prima ballerina, but few make it all the way to the <a href="http://www.bolshoiballetacademy.com/">Bolshoi Ballet Academy</a> in Moscow.</p> <p>Harper Ortlieb, a 15-year-old American, left her small town in Oregon to <a href="http://www.metronews.ca/entertainment/2016/03/04/harper-ortlieb-ballernina-dreams-at-bolshoi.html">follow her dream</a>. She’s one of the rare foreigners to be part of the academy’s regular Russian programme.</p> <p>“I’m very honoured and humbled to have been accepted here. I have learnt so much just in the couple of months I have been here. There’s corrections every single day. Point your foot harder, turn out more … and we are going to get that for the rest of our life, even when we are professional,” Ortlieb says.</p> <p>“It’s been very difficult, but with that comes strength and with that I improve.”</p> <blockquote class="twitter-tweet" data-lang="en"><p lang="en" dir="ltr">Oregon girl lands a place at Russia's Bolshoi ballet Academy: Last year, Harper Ortlieb, from Oregon, moved by… <a href="https://t.co/7P5AXgbdUj">https://t.co/7P5AXgbdUj</a></p>— EmpireOne News (@empireonenews) <a href="https://twitter.com/empireonenews/status/705873730371588100">March 4, 2016</a></blockquote> <script async src="//platform.twitter.com/widgets.js" charset="utf-8"></script> <h3>Grace and determination</h3> <p>The prestigious Bolshoi Ballet Academy has 84 foreigners among its 721 students — less than 12 percent. Some of these foreign students took part in this year’s spring concert, and Ortlieb was among the few girls from her class chosen for two of the dances.</p> <p>“You know preparing for this dance, there have been many rehearsals where I come home and I’m like, ‘I don’t know if I can do this’, you know mentally it’s difficult because everyday you are being told that things aren’t right. But you know that every day you get better too with that. Every correction you learn more,” she says.</p> <p>Determination is a large part of what it takes to be a classical ballerina, beyond the obvious physical skills and grace. And Harper’s teacher, Tatyana Galtseva, says she has it all: “We noticed Harper in New York during the summer master classes provided by our academy. We noticed she’s a very gifted girl. She’s all ballet, all inspiration. When children are talented, regardless of their nationality, they’re alike in some way, in how they approach what they do. She’s a very good girl, and we are happy to have her here.”</p> <p>On top of her dance classes, Ortlieb has Russian language lessons every day. On Sundays, her only day off, she likes to explore Moscow with her mother, who moved there to be with her. Together they’ve seen more performances at the Bolshoi Theatre than most Russians see in a lifetime.</p> <p>Ortlieb started ballet at a local dance school in her hometown when she was 3 years old. When she turned 11, she was accepted to the School of Oregon Ballet Theatre in Portland, a three-hour round-trip journey that she and her mother made six days a week.</p> <p>If she now wants to be one of the rare foreigners to graduate from the Bolshoi Ballet Academy, she has three more challenging years ahead.</p> <iframe src="https://player.vimeo.com/video/103562760" width="500" height="281" frameborder="0" webkitallowfullscreen mozallowfullscreen allowfullscreen></iframe> <p><a href="https://vimeo.com/103562760">Harper – The School of Oregon Ballet Theatre</a> from <a href="https://vimeo.com/oregonballettheatre"><span class="caps">OBT</span>-<span class="caps">PDX</span></a> on <a href="https://vimeo.com">Vimeo</a>.</p>