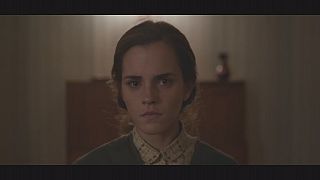 <p>Colonia is set in a turbulent Chile in 1973</p> <p>A couple become entangled in the Pinochet military coup in the south American country. </p> <p>When Daniel is abducted by the General’s secret police, Lena traces her boyfriend to a village called Colonia Dignidad, a mission run by a preacher. </p> <p>But this turns out to be a prison, from which no one has ever escaped. To save Daniel Lisa joins the Colony. </p> <p>Colonia stars British actress Emma Watson and German star Daniel Brühl who attended the European premier in Berlin recently.</p> <p>For Brühl, there was always interest in this part of the world:</p> <p>“I’ve always had a relationship with with Chile. I am the son of a Spanish mother and my parents were very committed about the country and very active then. And when I was young there was a family Chilean who lived with us. And I always had this contact with the culture and the history from a young age”</p> <p>Watson says politics aside, it was the character that intrigued her:</p> <p>“Lots of people have asked whether I chose this film because of my new found interest in politics. But really, it was just that I loved the role and of course it is an era that I am interested in, but it was really the character that drew me to the film.”</p> <p>Colonia is directed by Oscar-winning filmmaker Florian Gallenberger .<br /> Reacting to reviews that criticised the film’s handling of an important chapter of Chilean history, Gallenberger said it would help to get young people interested in a serious subject.</p> <p>“Apparently by watching this entertaining film people come across something that makes sense, which is more than just the film,” he said.</p> <p>“We didn’t want just to give a history lesson, but tell an enthralling, entertaining story, which also has a meaning. It seems that we succeeded in this.”</p> <p>Colonia will be on release in Switzerland and Germany from 16 February 2016, in Russia from 31 March 2016, in <span class="caps">USA</span> from 15 April and <br /> Italy 26 May.</p>