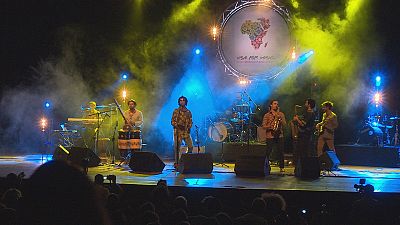 <p>The Moroccan city of Rabat has been echoing to the cadences of music from Africa and the Middle East. It was playing host to the second edition of “Visa for Music”. Professionals from the music industry from around the world turned up but not just to listen or to play. </p> <p>The music fest is about the business end of music with showcase concerts, professional training classes and speed meetings with the aim of providing a boost for the music industry.</p> <p>“Most of the artists who played here last year have been successful in getting dates at very prestigious festivals around the world, in Europe, the US, Canada and also in the Middle East,” explained Brahim El Mazned Director and founder of Visa for Music</p> <p>Amongst the bands which presented their music in a showcase concert was “Créole” from the Colombian coral island San Andrés.</p> <p>Patrick De Groote is the Artistic Director of a huge four day free festival in Belgium called Sfinks and it is his second time at the Visa For Music event.</p> <p>“I believe that in Europe, in the north that in the music fairs we see the same people who for years promoted the same artists to you then you come here to this fair with new artists and you make new contacts where there is youth and a freshness and a great joy which can rejuvenate our stage,” he said.</p> <p>Tenerife Creativa – that’s the title of a project which aims to boost private and public companies from the Canary Islands abroad. On their stand they had a Cuban singer, a keyboard player/singer from Japan and a guitar player from Tenerife. They all work together on the Canary Islands.</p> <p>“Traditionally the Canary Islands were very much orientated towards Europe and America. But now we are about to discover which is our continent and that’s Africa. We understand we have a lot of business opportunities there and we can organise a lot of collaborations and partnerships with all the companies we met here at this fair,” Nestor Yanes Diaz the Project Manager for Tenerife Creativa told euronews.</p> <p>Performing at another showcase concert – “Weesli” He was born in Port-au-Prince, Haiti and today lives and works in Montreal, Canada. </p> <p>German music and tour manager Stefanie Schumann does business at all the major music fairs around the world. She finds it a pleasant change from the main fairs.</p> <p>“There are many music fairs but for me the smaller ones are more attractive. At the really big ones people are very stressed and it’s really hard to take time with people and talk. Here it’s much easier to get to know the business partners much better and you can make contacts in a more meaningful way,” she opined.</p> <p>Gabacho Maroconnection is a a Franco-Hispanic-Moroccan band which mixes different styles of music. The Moroccan Master of Ceremonies and animator Mc Zanzan launched a video clip project at the fair last year.</p> <p>“So this year I am coming just to see how the project is right now, is there some development for this kind of stuff or is there not. It’s nice to be back this year in 2015. I meet new projects, new people who come from other countries, everything is good,” he said.</p> <p>Akoth Obanda is a singer from Kenya who had a successful few days.</p> <p>“I am really impressed by the amount of contacts I have made and the network I have created. I met so many people, so many producers, managers and professionals who have done it for a very long time. I met people I can work with and who have a professional future in music.”</p> <p>Billy Domingo is the Director of the Cape Town International Jazz Festival. “I think it’s time that South and North Africa join. I think its time for me to discover African artists in Africa instead of going to France or Belgium to find them. I wanted to find out what it was about and I am very impressed. I think it is very good.” </p> <p>Moroccan rocker Jbara mixes Rai – music from Algeria and traditional Moroccan music elements with rock and hard rock. Across the four days of Visa For Music around 60 bands presented their talents in Rabat.</p> <p>“The second edition of Visa For Music has proved there is a need for a music fair in the north of Africa. Let’s hope that the organisers will find the necessary support so that this music fair can become an established part of the international music industry,” concluded euronews correspondent Wolfgang Spindler at the fair.</p>