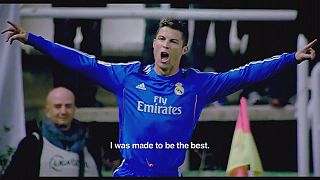 <p>To the delight of fans, Ronaldo has launched his self-titled film in London. </p> <p>Hundreds gathered at Leicester Square to catch a glimpse of the 30-year-old football player, considered to be one of the greatest of his time. </p> <p>He dedicated the film to his followers: “The people who really know me, they are not going to be surprised about the movie. But, as I say many times, I did the documentary especially for my fans because they are always with me in my good and my bad moments. So I think they deserve that.”</p> <p>Shot between Real Madrid’s European Cup triumph in 2014 and Ronaldo’s third Ballon d’Or, the film also features footage of him as a child. According to critics, it offers an <a href="http://www.theguardian.com/football/blog/2015/nov/05/cristiano-ronaldo-film-messi">intimate portrait of the player</a> and has been described as a <a href="http://www.independent.co.uk/arts-entertainment/films/reviews/ronaldo-film-review-a-revealing-and-often-surprising-documentary-a6723436.html">revealing and often surprising documentary</a>. </p> <p>The film was executive produced by the team behind award-winning films on Ayrton Senna and Amy Winehouse.</p> <p>“I think the way that he surrounds himself with his family and how he has an incredibly loyal core of people around him and has done from a very young age, how focussed he is on playing football, I mean he lives actually a relatively strict life. He comes home and trains and sleeps and does that. No mad partying. That was a surprise – his ability to deal with pressure is fascinating,” said the film’s director, Anthony Wonke. </p> <p>Inevitably, the film also delves into the supposed <a href="http://www.skysports.com/football/news/11096/10062099/cristiano-ronaldo-film-offers-uncomfortable-glimpse-of-his-world">rivalry between Ronaldo and Barcelona forward Lionel Messi</a>. Both are up for this year’s coveted Ballon d’Or.</p> <p>‘Ronaldo’ the documentary is out now.</p>