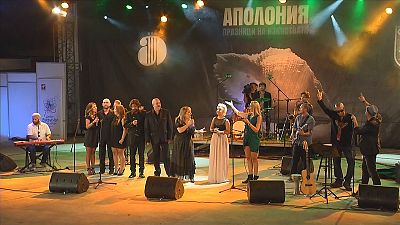 <p>The Apollonia Festival of Arts in the city of Sozopol is hailed as the most important cultural event in Bulgaria. Every August artists from all disciplines are on show at the city by the Black Sea.</p> <p>Bulgarian cinema is celebrating its 100th anniversary this year, and the festival opened with a tribute to the silver screen. Stefan Valdobrev and his band rehearsed ahead of the big night with Poli Genova, who represented Bulgaria in the 2011 Eurovision Song Contest.</p> <p>Valdobrev explained the choice of music for the opening night:</p> <p>“Bulgarian songs from popular Bulgarian films, throughout the years from the 1950s until now. Songs that people love and they love to sing and we did it in a new way.”</p> <p>Valdobrev is not only a musician and composer, he is also an actor and for the opening night he invited some of Bulgaria’s most famous singers on stage to perform the popular set-list.</p> <p>Film director Kristina Grozeva and Petar Valchanov were awarded for their exceptional contribution to Bulgarian culture and international achievement.</p> <p>Their latest release “The Lesson” tells the story of a young teacher in a small Bulgarian village. She hopes to teach her class a lesson by finding a thief among them to show them the difference between right and wrong. But her own struggle begins when she finds herself in debt to loan sharks. The film, which won many national and international awards, was screened at the festival.</p> <p>“When the festival was founded here in Sozopol over 30 years ago, the every day reality was such that the communist system constantly tried to limit the freedom of expression of artists in the country,” explains euronews reporter Wolfgang Spindler.</p> <p>Festival founder Dimo Dimov is himself a musician and is internationally renowned for his concerts. His reputation opened doors allowing him to push the borders and establish a multi-discipline arts festival with a free spirit.</p> <p>“The one and only slogan we chose at the time for the festival was: Freedom, freedom of arts, freedom of creativity and freedom of expression. So from the beginning, all the artists and the people who were into culture wanted to come here and everybody enjoyed the atmosphere and the free cultural exchange going on during the festival,” explained Dimov.</p> <p>The Old Town Gallery features the works of a variety of Bulgarian artists. A special tribute was paid to painter Dimitar Kirov, also known as DiKiro. He was one of the country’s leading artists until his death in 2008, and along with other painters was credited with modernising Bulgarian art in the 1960s. His widow, which was one of the last portrait subjects, was in attendance at the opening.</p> <p>Many artists struggle to make a living from their art, so being selected for the Apollonia exhibition is a great way to showcase their work.</p> <p>“This festival acts as a springboard for the artists and puts them in the media spotlight and as well as drawing the attention of galleries,” explained Milko Dobrev Curator & Artist. “As it’s the oldest and most popular arts festival of the country, all the media are present and want to report about the artists chosen for the exhibition and explain their work and the ideas behind their art in their various cultural programs long before the exhibition even has started. Also, they meet people who can support their work and help them to advance in their career. So the impact for the artists of being shown here, is quite important.”</p> <p>Two young talents rehearsed Johannes Brahms at the Archeological Museum of Sozopol for their chamber music concert. Pianist Arsen Tanchev (23) who is studying in Germany and violinist Zornitsa Ilarionova who is studying in Spain. These two virtuosos have already won many international music competitions.</p> <p>In the space of 10 days the Apollonia Festival of Arts packs in more than 70 events from music to theater, and dance to film as well as art at five different venues across the city.</p> <p>“If you’re eager to discover top class Bulgarian and international artists in an beautiful ancient city based right on the coast of the Black Sea. Then the Apollonia Festival is certainly worth a trip,” concludes Wolfgang Spindler reporting from Sozopol for euronews.</p>