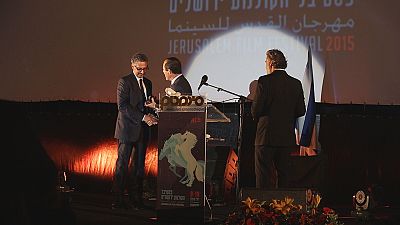 <p>The 32nd edition of the Jerusalem Film Festival kicked off with Hollywood glamour, as John Turturro attended the opening. </p> <p>The US actor, writer and director, famous for his roles in films like ‘The Big Lebowski’, ‘O Brother, Where Art Thou?’ and more recently ‘Mia Madre’, was honoured with a Lifetime Achievement Award.</p> <p>The main goal of the festival is to showcase the nation’s rich film production. Israel has been nominated for more Academy Awards for Best Foreign Language Film than any other country in the Middle East.</p> <p>Our cultural reporter Wolfgang Spindler says, that over the past years, Israel has increased both the quality and quantity of its films. The country enjoys good production facilities and a lot of talent. The subject matter is often the nation’s complex socio-political issues.</p> <p>Genre films are a new phenomenon in Israel – ‘JeruZalem’ by brothers Doron & Yoav Paz is a zombie movie about American tourists in Jerusalem, who encounter an apocalypse in the gated city. The action is shown from the perspective of one of the character’s high-tech Google glasses giving the film a real-life quality.</p> <p>It picked up Best Editing and the Audience Favorite Award, which is voted for by festival goers.</p> <p>Though the subject matter is heavy, these movies dealing with the ongoing conflict in the region draw a broad audience. </p> <p>Turkish film director Tayfun Pirselimoğlu was among the jury: “All the films I watched here are expressing a pain, a pain within society. At first sight it looks very local but on the other hand it’s universal problems, but it’s from the local problems going out to see humanity’s problems altogether.” </p> <p>‘Strung Out’, a documentary about a group of young women living on the streets of Tel Aviv, the victims of heroin addiction and prostitution, won the Best Director of a Documentary and Best Music awards. Director Nirit Ahroni also did the camera work: “It took me a year and a half before I allowed myself to come with the camera, we built a lot of trust,” she told euronews. </p> <p>“I used to help them, clean them, talk to them and they felt it will be their last chance to say what they have to say about their situation and maybe make the last document of their life.”</p> <p>It was a quiet, thoughtful film about an ultra-Orthodox Jew who goes through a near-death experience and starts questioning his faith that won Best Film. </p> <p>‘Tikkun’ picked up three other major awards including Best Script, Best Cinematography and Best Actor for Arab-Israeli actor Khalifa Natour. </p> <p>“It’s far away from my life, it’s not an easy character and it’s also another religion, it’s not my religion, it’s not my life,” he said. “I did not know anything before about this role or about this life of this character, so I studied a lot.”</p> <p>“The script is just a lot of layers and a lot of philosophic issues and it is tickling the issues in the film with questions not with answers,” said the film’s director, Avishai Sivan. </p> <p>Best First Film went to ‘Wedding Doll’, which also earned Asi Levi the Best Actress award for her performance as the mother of a disabled young woman who strives for independence and finds an unexpected romance when she falls in love with her boss. </p> <p>Asi Levi herself has two daughters: “I always mix my life because I am an actress and I work from material of my life and from what I know and from what I believe,” she said. “And I believe that a mother is a mother, so for me to be a mother is like an instinct.”</p>