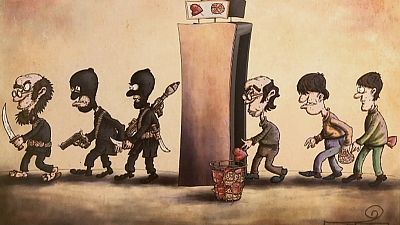 <p>Cartoons and caricatures depicting the self-proclaimed Islamic State militant group – and the international fight against it – have gone on show in Tehran.</p> <p>Organisers say the exhibition, recently held at the Palestine Museum of Contemporary Arts, features work of artists from more than 40 countries. </p> <p>The pictures have been selected as part of a competition, which aims to highlight the actions of <span class="caps">ISIL</span>, also known as <span class="caps">ISIS</span>.</p> <p>“Artists have tried to unveil the hidden and visible goals of <span class="caps">ISIS</span> for their audiences,” said journalist Reza Ghobeishavi.</p> <p>“These caricatures can make society aware of the violence and motives of this extremist group, and reduce the impact of propaganda as well.”</p> <p>Some of the exhibits make visual references to Saudi Arabia and America. The US is leading a coalition fighting militants in Iraq and Syria. </p> <p><span class="caps">ISIL</span> leader Abu Bakr al-Baghdadi is also depicted in the exhibition. </p> <p>The Iranian “House of Cartoon,” which organised the competition, says showing such work can be risky.</p> <p>“One or two Iranian cartoonists were threatened,” said Massoud Shojai Tabatabai, Director of House of Cartoon. </p> <p>“There were artists from Arab or western countries who had to participate under a pseudonym due to security problems, which they could have faced.”</p> <p>Those behind this exhibition say they are keen to promote a culture of resistance. They also want to bring the work of artists from Iran and other countries together, with the aim of creating dialogue. </p> <p>“What we worked on here is a matter which is upsetting for the whole world. Anybody, with any belief and ideology, is saddened by these brutalities,” said caricaturist Amir Dehghan.</p> <p>“We did our best to show the absurdity of <span class="caps">ISIS</span> and its supporters’ claims, and honestly, to me, <span class="caps">ISIS</span> itself is a caricature.”</p> <p>Exhibition visitor Sepehr Abravesh commented: “A picture can depict a subject without words. It might be impossible to put the crimes of <span class="caps">ISIS</span> into thousands of words. But you can easily show it in a picture, which is understood by all, either illiterate or intellectual.” </p> <p>Organisers say they are now planning to take this anti-<span class="caps">ISIL</span> exhibition to Iraq, Syria and Lebanon. There is also an online version.</p>