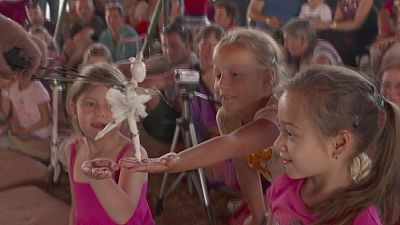 <p>For three days every July, the small historical town of Nyírbátor in eastern Hungary is invaded by street performers, taking part in the <a href="http://kemeri.wix.com/sarkany#!english/c107o">Winged Dragon Festival</a> which attracts artists from around the world.</p> <p>It may me small, but according to Agnieszka Musiałowicz, leader of the Polish troupe, <a href="http://www.teatrakt.pl/index_en.php">Teatr Akt</a>, small is beautiful.</p> <p>“It doesn’t matter for us that this is small, that there are not so many people, because the atmosphere here is really good. Artists and audience here are open for people. We’ve met so many different groups we met, so many theatres, and everybody felt at home.” </p> <p>One of the biggest stars of the festival turned out to be its smallest, the so called <a href="http://www.mikropodium.com/22old.htm">Mikropódium</a>. </p> <p>Hungarian puppeteer András Lénárt has a special way of making his characters come to life. He invented a unique technique by combining the tricks of Vietnamese water puppet theatre and Indonesian shadow play. </p> <p>“This is a very subtle little spiritual play,” explained Lénárt. “Its title is “<span class="caps">STOP</span>”, stop and and see! Interrupt the everyday rush, and have a look at puppets, a miracle you hardly ever can see in other places.” </p> <p>His tiny dancer has captivated audiences at more than 280 international festivals around the world from Argentina to China. </p> <p>With more than 50 street theatre performances, children of all ages get the chance to meet puppeters, jugglers, acrobats, stilt walkers, and musicians. The Winged Dragon Festival attracts art event organisers as well. </p> <p>“This is a professional meeting as well, a kind of showcase, because there are a lot of festival organisers coming here from Hungary and abroad to pick from the productions,” noted György Dózsa, director of the festival.</p> <p>Josefina Perez Gardey and Juan Ignacio Rey hail from Buenos Aires. </p> <p>Josefina, known as clown Muruya, is travelling the world with her ‘One Girl Show’. <br /> It was her first time in Hungary and she found that her art transcends language thanks to a shared sense of humour.</p> <p>“It’s more similar, this country, Hungary, these people with us. The other people in Europe are more cold, more serious. You understand? And here more funny!” </p> <p>A juggler, acrobat and clown Juan Ignacio Rey has participated in street art festivals worldwide with his show eccentrically titled “Manic Freak little clown”.</p> <p>In Nyírbátor euronews reporter Erika Kocsor sums up:</p> <p>“Do you want to play, be happy and make other people happy? If yes, you should come and see the Winged Dragon Festival next year!”</p>