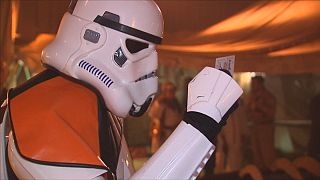 <p>It’s the latest in immersive entertainment – <a href="http://secretcinema.seetickets.com/tour/secret-cinema-presents-star-wars/list/1/100">Secret Cinema</a> in London is bringing to life one of the most popular film franchises of all time in a summer screening of ‘Star Wars: The Empire Strikes Back’.</p> <p>As the name suggests, little is revealed of what the evening entails and attendees are asked not to unveil details and take an active role in the event which culminates with the film’s screening.</p> <p>“I think that audiences are looking for experiences that go beyond the traditional theatre, traditional concert, traditional gallery, traditional restaurant. I think people are looking for a new way to experience culture, and I think what Secret Cinema has untapped is that desire (that) is increasing with every technology that comes out. I think audiences are looking to connect and become part of the culture, become part of the experience,” says Secret Cinema founder and director Fabien Riggall. </p> <p>Guests are given special codes and identities as they join the Rebel Alliance against the Empire.</p> <p>Upon arrival, they are <a href="http://metro.co.uk/2015/06/14/secret-cinema-presents-star-wars-5-things-you-need-to-prepare-yourself-for-5245548/">transported into the space fantasy</a> mingling among aliens and well-known characters in a narrative that begins with the first Star Wars episode.</p> <p>Some make trades or are given missions, others less fortunate are dragged away by Stormtroopers.</p> <p>The Secret Cinema experience comes at a cost though, at 75 pounds per person, a sum described by one critic as <a href="http://www.wired.co.uk/news/archive/2015-06/04/secret-cinema-star-wars-opinion">an elaborate ripoff</a> if you add the price of the costume which guests have to buy as well.</p> <p>If you’re a die-hard Star Wars fan and the cost hasn’t put you off, the show runs daily until September 27.</p>