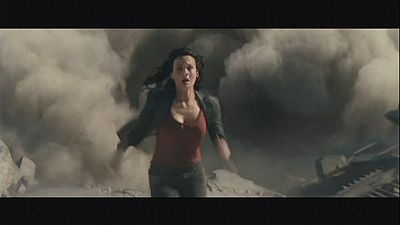 <p>California has been speculating on when the Big One will hit for years: a hypothetical earthquake of magnitude 8 expected along the San Andreas fault which would devastate the population, and a new film starring Dwayne Johnson aka The Rock is looking to cash in with a big budget action extravanganza.</p> <p>For the director of San Andreas, Brad Peyton, it was important that the actors concentrated on their craft while the visual effects team worked their magic:</p> <p>“There’s a saying that I have with the crew, which was, ‘Let’s build the ride and put the actors on it.’ And what that really was representing was, ‘I don’t want them to have to fake it. I don’t want them to have to (do) old-school 1970s ‘Star Trek’ it: ‘Lean this way. Lean that way.’ And now all I’m asking you to do is that’s all you’re thinking about, which is technical. I don’t want you to think about the technical. When there’s this many cameras and lights and gimbals and rigs, that’s a lot of technical. My job is to try to erase that as much as I can for you so that you can just get into those moments and do the beats and do your lines and have those real honest kind of emotional moments.”</p> <p>The story follows Johnson, a helicopter pilot with the LA Fire Department as he struggles to keep his family safe from the deadly tremors. With more than 1,300 special effects it was a tough shoot for the Hollywood cast.</p> <p>“For sure, there were moments for me in the rooftop sequence, and several moments when I was genuinely scared,” explained actress Carla Gugino. “I knew I was in safe hands. It wasn’t a lack of trust of anybody else. But it was that I was given enough elements to actually go, ‘I’m a little nervous.’ I know that I have a man on the end of this wire, but I have to be the one to take the risk and go, ‘I’m going to just fall and it’s 20 feet, and if somebody is grabbing their coffee, I’m down.’”</p> <p>Competing against comic book heroes, the disaster flick has been largely shelved by studios in recent years, and has often been a box office flop. Action movie veteran Dwayne Johnson has his own theory as to why disaster movies are few and far between.</p> <p>“There’s a reason why disaster movies, there’s not five of them every single year. There’s a reason why for that: Because they’re not the easiest movies to make. There are a lot of elements that make it very difficult. Balancing great destruction, heart, family, an anchor, well-written stories, well-written characters, things like that.”</p> <p>As long as you’re not expecting documentary realism, the mindless destruction of America’s Golden State in its <span class="caps">CGI</span> glory could be an entertaining primer ahead of this summer’s major blockbuster releases such as Jurassic World. </p> <p>The film opens across Europe from the 27th May.</p>