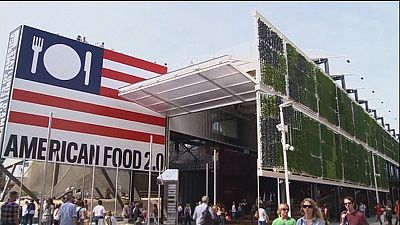 <p>The latest Universal Expo has brought 145 countries to Milan where<br /> they have erected pavilions to show off the best they can offer in modern design and technology. </p> <p>The event challenges the entrants to demonstrate how they intend to maintain global food supplies while respecting the equilibrium of the planet. It is also a chance for architects to show off their wildest, wackiest ideas. </p> <p>Giant, husk-like leaves wrap around Mexico’s pavilion. The curved <br /> panels celebrate the country’s most ancient, and popular grain – maize.</p> <p>The public moves via oval ramps on six levels, hinting at the ancient farming canals of pre-Colombian Mexico.</p> <p>Architect Francisco López Guerra designed the pavilion.</p> <p>“The basic concept was taken from Mexico’s rich culture, and we took the idea of maize, which is the biggest contribution Mexico has given to the world,” he says.</p> <p>While Guerra lures visitors with millennia of history, other architects use interactivity. For Brazil, this becomes a giant net suspended in mid air, beckoning visitors to bounce into their indoor pavilion.</p> <p>Underneath, small gardens feature some of Brazil’s top products, such as coffee and tropical fruits.</p> <p>“It’s a way of attracting people here, by using the net, creating a permeable pavilion. We didn’t want a pavilion with a long queue, struggling to get in, but rather, a pavilion with huge permeability, where people can have fun coming here,” says architect Arthur Casas.</p> <p>Of the 145 countries represented at the Milan <span class="caps">EXPO</span>, only about a third – 54 countries – invested in their own pavilion.</p> <p>Switzerland spent more than 22 million euros. Their main attraction is two central towers filled with the country’s top food products. They contain, under a banner saying “Will there be enough for everyone”,96,000 litres of water, 2,500 doses of coffee, 840,000 dried apple rings and two million cubes of salt. It is all free for the taking.</p> <p>Architect Daniel Christian designed the towers to shrink as visitors empty them out.</p> <p>“In the centre of the Swiss Pavilion are the towers, they are filled with different food products, and everybody can come and take the food. It all depends on how many they take. If they take a lot, it will be empty. And that shows how important people’s behaviour is,” he says.</p> <p>French architects from X-TU, have designed their pavilion to celebrate the country’s fertile landscape. It comes in the shape of a 7,000 square-metre market, made only with French wood.</p> <p>“We wanted to show the diversity of France’s landscapes. So for the interior of the pavilion we carved out hollows that represent the hills and mountains. And also the facade that you see shows this natural relief made of hills and mountains,” says architect Anouk Legendre.</p> <p>Beyond using sustainable materials, all pavilions are required to build half of their lot outdoors, and ensure it can be easily removed after the expo.</p> <p><span class="caps">EXPO</span> Milano 2015 runs from May 1st until October 31st 2015.</p>