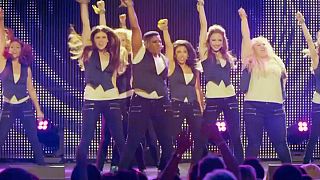 <p>‘The Hunger Games’ actress Elizabeth Banks is making her directorial feature film debut with musical comedy ‘Pitch Perfect 2’.</p> <p>A surprise hit back in 2012, the first ‘Pitch Perfect’ was an irreverent, girl-powered comedy that followed the exploits of a quirky group of college singers. </p> <p>Banks hopes she’ll <a href="http://www.hollywoodreporter.com/news/elizabeth-banks-200-million-path-791855">inspire more women to take on the directorial challenge</a>.</p> <p>“I actually felt a lot of support, I felt there was a lot of people rooting for the movie to work, and my crew was amazing, and the cast was great, and I’m really proud of the product, I think the product tells you everything you need to know about how the shoot went. You know, I think just because it’s rare doesn’t mean that it’s a particularly difficult or hard job to do – I mean boys do it all the time. I hope, really, that what I’ve done inspires other women to get behind the camera and tell more of these stories,” says Banks. </p> <p>Banks reprises the role of Gail in this sequel, which also stars Anna Kendrick, Hailee Steinfeld and Rebel Wilson, who stole the show in the original film as Fat Amy. </p> <p>“Fat Amy, she’s very sassy, and very confident, but overly confident which is how she gets a lot of her humour,” says Rebel Wilson. “And I think I’m not like outrageously confident in real life but I have an inner confidence and I think like (makes me) comfortable in my own skin.”</p> <p>Despite what critics describe as some cinematic flaws, <a href="http://www.theupcoming.co.uk/2015/05/06/pitch-perfect-2-movie-review/">for the right audience ‘Pitch Perfect 2’ is a feel-good comedy worth watching</a>, delivering <a href="http://www.theupcoming.co.uk/2015/05/06/pitch-perfect-2-movie-review/">some stunningly choreographed dance pieces (and) an impressive array of different styles</a>.</p> <p>‘Pitch Perfect 2’ is on global release from mid-May.</p>