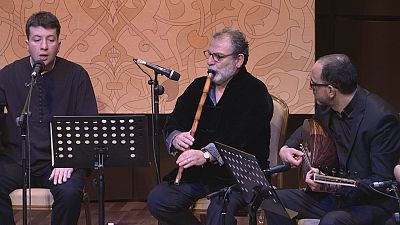 <p>Kudsi Erguner is considered a master of traditional Mevlevi Sufi music and is one of the best-known players of the ney, the Turkish flute. He comes from a family steeped in Sufi music stretching back four generations. </p> <p>Erguner spoke to euronews during International Mugam Festival in Azerbaijan. He has a lot to say about the relationship between traditional Sufi music and modern interpretations of it.</p> <p>“There is nu-electronic dance sufism if seen from modern point of view. In fact sufism is closer to techno. It is an adopted enthusiasm popular among those who are more westernised in Muslim societies. You see people spin, people who play the ney, people who feel sufi but what is more important you get people interested in mysticism whose traditions offer them no connection with this,” he says.</p> <p>Erguner, who moved to Paris to study architecture in 1973, has released more than 200 albums during his career. Despite a busy routine, he has been composing film soundtracks for the past 20 years, and plays his ney on some European movie soundtracks. </p> <p>On his one of his later albums, ‘Islam and Blues’, which came out in 2013, he and his band set some poems of Ibn-i Arabi in Arabic to flamenco music. The project was supported by the Spanish Ministry of Culture. </p> <p>‘‘We are talking about mysticism or sufism.. This mysticism already existed in Andalusia, during its Islamic period. A great example of this would be İbn-i Arabi. He has a poetry book called “Tercuman-ül Eşvak”(Translation of your feelings). Flamenco players read these poems, while we read them in Arabic. So we did not just aim to combine flamenco with our own music. We wanted to show that our cultural inheritance extends from the shores of Spain to India, way beyond our political borders. We wanted to emphasise that it reaches out very far and so it should,” says Erguner.</p> <p>Kudsi’s career of more than 4 decades has taught him that culture has no boundaries. He performs worldwide and has a full dairy. In the month of March alone, the artist performed in Rotterdam, Los Angeles and Venice. He performs in Berlin and Ankara in April.</p> <p>“Of course, the boundaries of culture are very different to political borders. Unfortunately political governments, their with nationalistic perspectives, are trying to keep a single culture within the borders of their country. But we also play music composed by Greeks. There are also Armenian composers, our Armenians. For instance, if you took the works of Tatyos Ekserciyan or Hampartsoum away from Istanbul, there would be no such thing as ‘our’ music”, he says.</p>