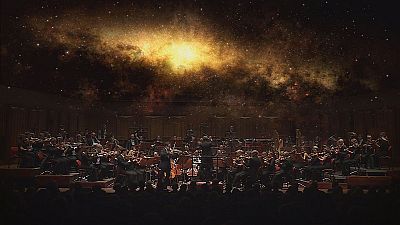 <p>Bridging the gap between music and science: it’s the dream, and the objective, of a young, talented and successful conductor.</p> <p>In Stockholm, where he has his symphonic orchestra, Daniel Harding has created “Interplay”, <a href="http://sverigesradio.se/diverse/appdata/isidor/files/3966/14443.pdf">a thought-provoking series of events</a> combining a concert, a debate and a talk between musicians and scholars from the scientific world. </p> <p>The most recent guest was <a href="http://sverigesradio.se/diverse/appdata/isidor/files/3966/14443.pdf">Professor Brian Cox</a>, a particle physicist as well as former rock star and today world-renowned populariser of cosmology.</p> <p>The soundtrack of the event were Mahler’s “Song of the Earth” (performed by tenor Andrew Staples and contralto Wiebke Lehmkuhl), and a contemporary piece for violin and orchestra inspired by the “Voyager” space mission, composed by Academy Award winner Dario Marianelli. Jack Liebeck was the violinist.</p> <p>The music is an example of the mutual influence between the arts and science and was played by the Swedish Radio Symphony Orchestra. </p> <p>“What is life? Where does it come from? These are ancient philosophical questions, and the arts have always been one of the ways that humans have to deal with these questions; we have been through the period of the great philosophers, and we had art and we had music that reflected these great ideas of mankind.</p> <p>‘Now we live in a time where, the best answers that we, as a species, can produce to these most important questions, come from science, so we can’t afford to allow ourselves to become disconnected from science in the Age of Science!,” explained Daniel Harding.</p> <p>“Listen to Mahler, he wrestles with the idea of the finite nature of existence; and what’s interesting is that science and modern cosmology make that question more vivid; the scientific backdrop is different, but I think the question is the same, and it’s ‘what does it mean for a civilization, or an individual, to have the finite lifetime, potentially, in an infinite universe?’ If we’re the only civilization in the Milky Way galaxy, for example, does it mean that we are rare? which I think means that we are valuable!,” said Professor Cox.</p> <p>“There are themes in [Mahler] which seem to suggest that you should enjoy life, celebrate life while you can, treasure every moment, and I think that’s what modern science is telling us, actually: that unless we do something remarkable in terms of interstellar travelling, colonizing the galaxy, the whole of humanity is most likely to be transient,” he added. </p> <p>“What I think many of the great artists have understood is that transience makes our existence valuable, and it seems obvious that if you’ve got something that’s transient and rare, and therefore valuable, then you should protect it.</p> <p>‘You can listen to [Mahler’s] music as asking questions about the existence of the human race or, indeed, of the universe itself. So I find that listening to music that can be 100 years old or more actually can be extremely relevant in trying to understand what new discoveries actually mean… what’s the meaning of cosmology? Well, Mahler can help you! Because it’s a similar question to ‘what’s the meaning of my single life?’ “</p> <p>“I wonder whether, when we ask ourselves today where are the Michelangelos, the Leonardos, the Shakespeares, the Mozarts… where are the great figures that hundreds of years from now we’ll look back and say these were the really important people who changed the course of mankind through their thoughts, their imagination, and their creativity… and I wonder, perhaps, those people today are the scientists,” concluded Daniel Harding.</p>