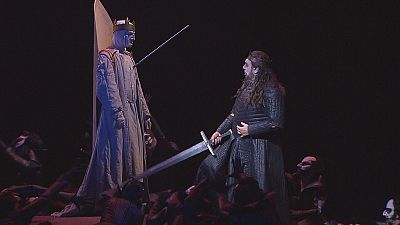 Destructive power, unlimited ambition and evil are at the heart of Guiseppe Verdi’s dark masterpiece ‘Macbeth’, his first adaptation of a Shakespearean play.

Superstar Plácido Domingo debuted as Macbeth recently at the Berlin State Opera under the baton of Daniel Barenboim.

For the past few years the great tenor has switched to singing baritone roles.

“As a tenor I always was like the hero and I always tried to avoid villains and as a baritone I have been trying to concentrate on the fathers you know and the positive parts,” he told euronews.

“Macbeth I thought I will never do it because Macbeth really is a killer, is a murderer. But I studied the opera intently and I realized that he is a victim of Lady Macbeth.”

His relentless wife persuades him to kill in order to become Scottish king. The drama portrays their downfall, caught up in the quest for ultimate power.

“He is crazy because he committed murder. We see this man completely lost. He was hoping to be a good king. He was hoping to arrive at an elderly age with people loving him and he has not been able to do it,” Domingo told euronews.

Macbeth is finally killed by the nobleman Macduff, sung by tenor Rolando Villazón.

“I’m on stage and I watch him in rehearsals. I listen to this glorious performer and it’s just the most wonderful experience to be able to be in the same time of this incredible performer. Opera is before and after Plácido Domingo,” said Villazón.